Home / Monaghan and Cavan ladies aim for All Ireland glory 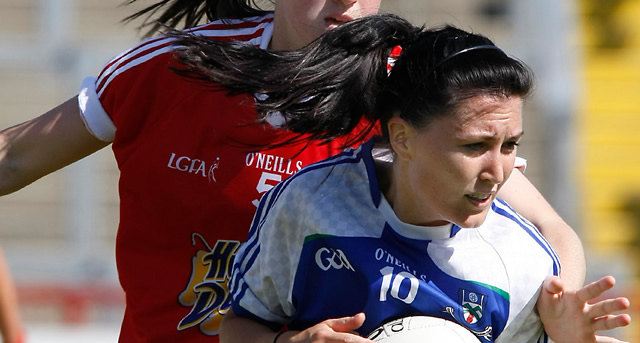 This Saturday and Sunday is the biggest weekend in the ladies football calendar and there will be lots of Ulster interest and involvement.

A triple header of Finals will take place on Sunday in Croke Park and all eyes will be on the ladies of Monaghan and Cavan to see if they can deliver the much sought after silverware.

Monaghan meet Cork in the senior decider at 4pm.  The Farney side have been on a good run of late. They comprehensively beat Tyrone in the Ulster final and then did a demolition job on Laois in the All Ireland quarter final. In the semi- final against Galway they played a very cautious game but managed to get over the line in normal time. Cork is the reigning champions but had a poor campaign until their last few games. Kerry beat them twice in Munster but as a beaten provincial finalist they went through the back door were they had some fine victories including a win over arch rivals Kerry in the All Ireland semi- final. The final between Monaghan and Cork is the most anticipated game of the season and fingers crossed come 5-15pm on Sunday the Brendan Martin cup will be heading north.

At 2pm Cavan and Tipperary will meet in the intermediate final. The breffni girls have come through the qualifiers, improving with every match. They firstly beat London and then seen off the challenge of last year’s beaten finalists Waterford. That set up a semi-final against Down. On that day Cavan were awesome and totally outplayed the Mourne girls to set up a final meeting with Tipperary. At this stage it must be said that the Tipp girls are lucky to be in the final. They scored 1-2 in the final minute of their semi- final with Fermanagh to secure their place with a single point win. Cavan will need to be focused for the full sixty minutes but rightly go into the decider favourites.

For those who cannot attend updates will be available on the Ulster Ladies facebook page and twitter accounts. The game will also be shown live on TG4.

While no Ulster referee will be taking charge in Croker on Sunday a number of personnel from the province will be on duty. Down whistler Gavin Corrigan is standby referee on the senior game, Cavan’s Maggie Farrelly is the 4th official and Tracey Brennan from Tyrone will be running the line. Garry Owen Mc Mahon who lives in Dublin but hails from Monaghan is the standby referee on the intermediate final. For the junior decider Cavan referee Yvonne Duffy is the standby and Mary Foy from Monaghan is on the line. Tyrone’s Eileen Jones is the referee co-ordinator for the day and Paul Swift from Monaghan is on clock duty for the first two games.

Before all of that 15 teams from the province will be in seven a side action on Saturday when the Tesco Homegrown All Ireland sevens takes place in Malahide and Portmarnock. Those attending include Carndonagh (Donegal), Mna Na Deirge (Tyrone) and Aughnamullen (Monaghan) in the Juinor, Beragh and Strabane (Tyrone), Inniskeen (Monaghan) and Clonduff (Down) in the Intermediate and Donaghmoyne (Monaghan), Bredagh, Saval and Carryduff (Down), Glenelly and Errigal Ciaran (Tyrone), St. Gall’s (Antrim) and Clann Eireann (Armagh) in the Senior.

Whatever happens in Dublin over the two days, a feast of Ladies Football will be on show – fingers crossed the results go Ulster’s way!