The 2013 Ulster Club championship finals turned out to be three ding dong affairs which resulted in two narrow victories and a replay. The eventual senior winners Donaghmoyne will now meet The Banner (Clare) in the All Ireland semi- final while the intermediate champions Glen and junior winners Shane O Neills have quarter finals this weekend in London and Edinburgh respectively. 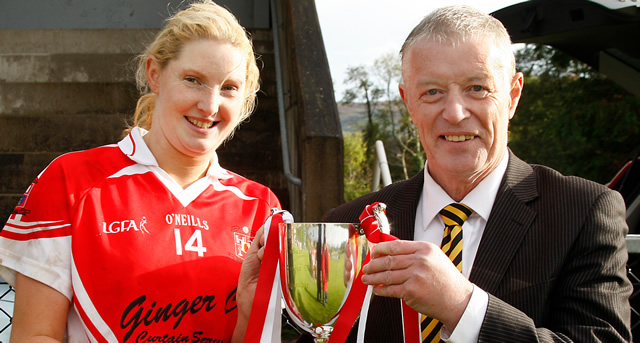 Donaghmoyne needed a second day out to retain their provincial title against a very good Termon side.

In the first game Donaghmoyne led by 6 points at half time however second half goals from Grainne McDaid, and a couple from Gealdine McLaughlin actually gave Termon a two point lead entering injury time. Cool heads were now needed and that’s exactly what Cathriona Mc Connell provided as she sent over two late points to salvage a draw 1-14 to 4-5.

In the replay which was played in Trillick, Donaghmoyne made no mistake winning 4-14 to 1-4 to lift their 8th Ulster senior title. Captain Majella Woods turned in a match winning performance and contributed 1-3 in the first half to help her side to a 1-5 to 1-2 interval lead.

In the second half it was all one- way traffic and further goals from Niamh Callan, Cathriona McConnell and Amanda Casey helped the reigning champions to a convincing victory.

The day was one of mixed emotions for some of the winning players. Amanda Casey played twenty four hours after her grandfather died but on a happier note the five Courtney sisters Joanne, Fiona, Sharon, Cora and Rosemary all started the game for the winners.

Just when it looked like the Ulster Club Intermediate Final was going to extra time Glen corner back Sarah Kerr popped up to fire over the winner for the Derry champions.

This was a tight game from the start with neither side dominating. Milford did appear to be going in at the break level however in injury time Louise Gunn was on hand to palm the ball to the Milford net to give Glen a midway lead 1-4 to 0-6.

The second half was every bit as tight and it became the Milne versus Barrett show. Glen number ten Caoimhe Milne kicked 8 points and won the player of the match award but she was pushed all the way by Milford’s Amber Barrett who finished with a tally of 1-9. The game looked very much like it was heading for extra time but with Glen’s very last attack Sarah Kerr kept her head to fire over the winner and help the Derry champions to their third Ulster title.

The Glen side will not have much time to celebrate as they are off to London to play Fr. Murphy’s in the All Ireland quarter final this weekend.

The Junior title was the first of the Ulster Club finals to be decided when South Armagh side Shane O Neills saw off the challenge of Tyrone hopefuls Aghyaran. This was a remarkable win when you consider that the oldest player in their starting fifteen goalkeeper Alice Tavey is just 18 years of age, their captain Louise Kenny is just 17 and centre forward Aimee Mackin who top scored with eleven points is just 16.

Emyvale was in excellent condition and despite a horrible bout of rain midway through the first half both sides served up some entertaining football. At the break it was Shane O Neill’s who lead by a single point 1-5 to 0-7, their goal coming from the excellent midfielder Moya Feehan.

Things remained tight for the third quarter, however in the final ten minutes Shane O’Neill’s edged away with Aimee Mackin rattling over a number of excellent scores. Goals win games and the O’Neills had Moya Feehan, Blaithin Mackin and Louise Kenny on hand to score theirs to help secure their victory, with the latter receiving the player of the match award.

The Armagh girls now must travel to Edinburgh to play the British champions Dunedin Connollys in the preliminary round of the All Ireland series.