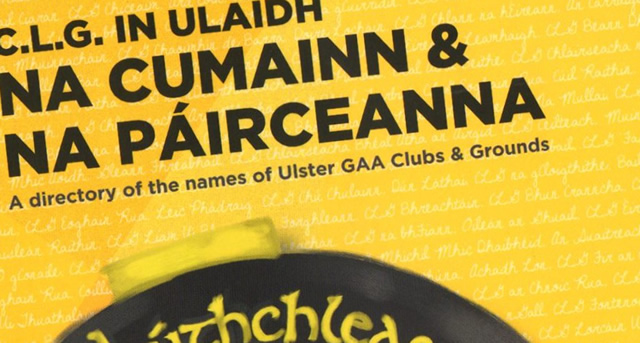 How often has the question been asked about what the proper name for your club in Irish, or even in English for that matter? The publication of a new booklet by Comhairle Uladh CLG attempts to answer that question for all the GAA clubs in Ulster.

C.L.G. in Ulaidh: Na Cumainn agus Na Páirceanna is the product of a special subcommittee established by former Ulster Council president Aogán Ó Fearghail. It represents an attempt to achieve standardisation in the spelling and structure of names for clubs and grounds, both in Irish and in English. The names of approximately 400 GAA, camogie, women’s football and handball clubs are listed in the booklet.

This is the first time that a publication of this nature has been produced on such a scale. Indeed the only other resource for club names to date was issued by the hard-working Coiste Cultúir Ard Mhacha a couple of years ago.

In view of the fact that the Irish spelling of a name can change according to the context of its use, the booklet lists the full name of each club, then its abbreviated version (which might be used on a scoreboard, for example), and then the abbreviated version in the genitive case (essentially, when the club name is preceded by another noun – as might appear in a match-report).

A lengthy process of research and consultation went into the compilation of the booklet.  Books on local place-names and the recently launched website www.logainm.ie were referred to, and university-based Irish lecturers and experts on place-names contributed numerous corrections and amendments along the way.

Perfection is somewhat unattainable in many instances, as the booklet acknowledges. For several place-names, there is no consensus on their Irish meaning or spelling, and in such cases a couple of options are presented in the text. Some of the versions of place-names promoted in the booklet are the result of recent revisions by place-names experts, relatively unknown or commonly is-spelt, so it is to be expected that they will generate some debate if not disputes!

For instance, Galbally is translated as ‘Gallbhuaile’ (‘the stone of the booley or milking-place’) – and not ‘Gallbhaile’ (‘the place of the foreigner’) as it is often misunderstood to mean. And the correct equivalent of ‘St Mary’s’ is ‘Naomh Muire’ – not ‘Naomh Mhuire’, which has long been in circulation.

Since the publication of the booklet, further information and spelling errata have come to light in a number of cases, and these will be modified accordingly in the digital version of the booklet shortly.

One suggestion made strongly within the pages is that clubs bearing the name of a patron saint or an historical figure should, like schools and other institutions, put that person’s name before the place-name in the English version of their titles – e.g. St Patrick’s GAA Club, Lisburn, rather than Lisburn St Patricks.

It is hoped that the recommendations made in the booklet will help to bring about more accuracy and consistency in the use of club names, particularly in their crests, letterheads, premises and other formal settings in which they appear.

Illustrated beautifully by Lairdesign, the booklet is free of charge but a limited edition. It can be obtained from county cultural officers or from the Comhairle Uladh office by ringing 028/048-37517180 or e-mailing donal.mcanallen.ulster@gaa.ie. The contents may also be downloaded from www.ulster.gaa.ie