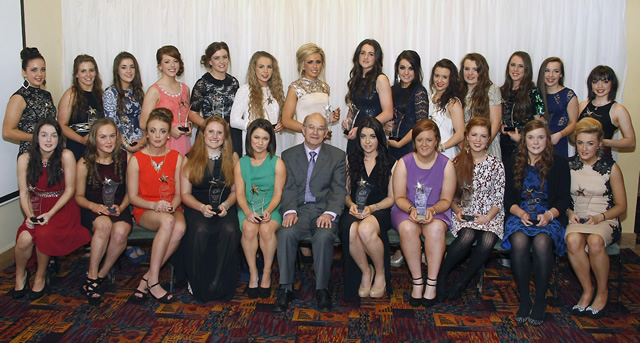 Friday night past saw the announcement of the Kukri Sports Ulster Schools All Star Awards for 2014 in Kelly’s Inn, Garvaghey. 25 girls from 17 schools made the cut and will now go on to represent Ulster in the Post Primary Schools Inter-Provincial Tournament in Mullingar at the end of the month.

Speaking at the event the Ulster Schools Chairman Louis O’Donnell congratulated all the girls on their achievement and thanked all their teachers and schools for the invaluable support and co-operation throughout the year, without whom schools football could not survive.

Guest speaker on the night was Tori McLaughlin from Strabane Sigersons in Tyrone who is a past pupil of Loreto Grammar School in Omagh and was one of the first All Star recipients four years ago. Tori spoke of how during her school life she balanced study and football and used it as a release when the books got too much. She also told the girls about her experiences playing football in Queens University Belfast winning last year’s O’Connor Cup and lifting the league title and how being part of the Queens GAA Academy has helped her develop as a player. Tori is also part of the Tyrone Senior Ladies squad and is a great role model for the 2014 squad.

Pictured is the Kukri Sports Ulster Schools All Star Team for 2014 along with schools chairman Louis O’Donnell.