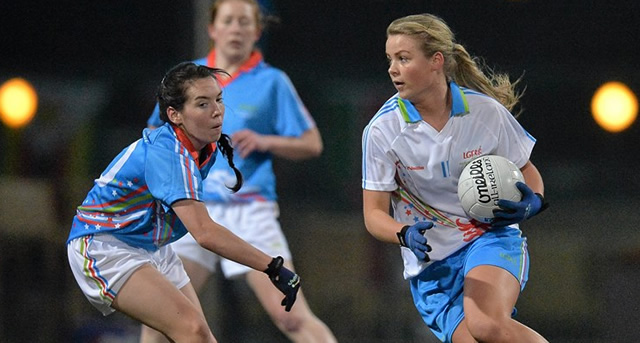 The 2012 and 2013 TG4 Ladies Football All Star selections travelled from Dublin Airport to Hong Kong for the TG4 All Star Tour on Tuesday, March 11th. The touring group which were based at the Grand Hyatt Hotel for the 9 day tour featured twelve players from Ulster. As well as playing the annual All Star match the two squads were guests of honour at the annual St. Patrick’s Society Ball in the Grand Hyatt Hotel on Saturday, March 15th and then on St. Patrick’s Day the players visited a selection of school’s in Hong Kong where they talked to the students and hosted training and skills sessions with all of the children. There are actually 2000 girls playing ladies football in Hong Kong and the GAA Board employed two female football coaches in 2013.

The All Star match was played under lights at the Hong Kong Football Stadium. The teams played a 14 goal thriller which the 2012 side won 9-19 to 5-14. Ulster players Caroline O Hanlon, Cora Courtney, Caoimhe Mohan (pictured) and Bronagh Sheridan all managed to get on the score sheet. Two very interested spectators at the game were Paul Kavanagh (The Irish Ambassador to China) and Brendan Howlin (the Minister for Public Expenditure). The players returned home from the Far East on Thursday 20th March.

The players from Ulster involved were as follows: