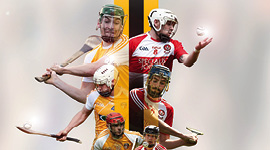 The 2014 Ulster GAA Senior Hurling Championship was a five county competition with Aontroim again receiving a bye to the Ulster Final. In the quarter finals, played in the Athletic Grounds on 15th June, Doire defeated Ard Mhacha by 4-16 to 3-13 scoreline. On the same day, Dún na nGall and An Dún formed a double header with a USFC clash between Muineachán and Tír Eoghain in front of a huge crowd at Clones. An Dún ran out comfortable winners.

In the Semi Finals, Doire and An Dún could not be separated after extra time as they played out a 5-22 to 3-28 thriller. The replay took place six days later with Doire emerging on a 2-19 to 1-15 scoreline at the Athletic Grounds.

The Ulster Senior Hurling Final between Aontroim and Doire took place at the fine setting of Owenbeg on Sunday 13th July in front of almost 1,500 spectators. In a thrilling encounter that ebbed and flowed, Aontroim edged out the Oak Leaf men on a 2-17 to 2-16 scoreline. 2014 provided a positive image of our flagship hurling championship and congratulations to Aontroim on their 13th consecutive title.