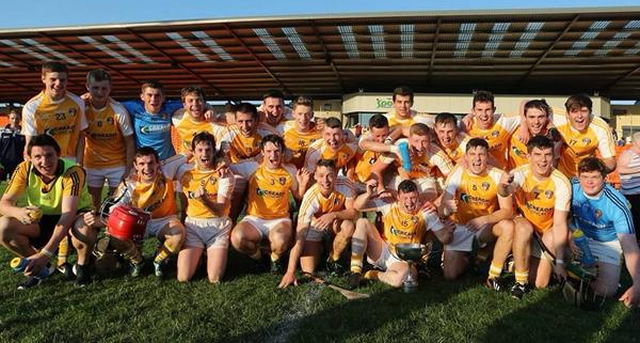 Antrim won their sixth Ulster U21 hurling title in a row on Wednesday night, overpowering Down in a very one-sided final at the Athletic Grounds.

The Saffrons actually conceded the opening two points of the game, from Down duo Peter Mason and Eoghan Sands, but they hit 1-7 before the break to lead by eight at half-time. Their opening goal came a few minutes before the break through substitute Seán McAfee.

Antrim found the net six times in the second half as they ran riot on Down. Niall McKenna and Saul McCaughan both landed goals shortly after the restart to effectively end the game as a contest, while further goals followed from McCaughan and Connor Burke (2).

Down substitute Conal Fitzsimons found the net for the Mourne County 10 minutes before the end, but it was a brief respite as Ciarán Clarke scored Antrim’s seventh goal mere seconds later to take his personal tally for the game to 1-6.