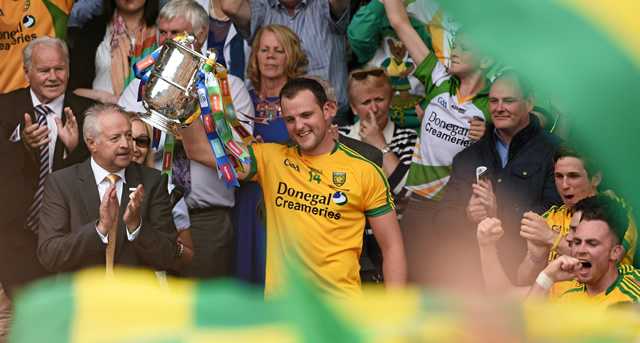 Donegal wrapped up a third Ulster title in four years with victory over Monaghan in Clones on Sunday.

The margin of victory did not flatter Jim McGuinness’ side, who were the dominant team throughout and could easily have won by more. Scores were at a premium in an attritional decider played in front of 31,912 in St Tiernach’s Park.

In what was a repeat of last year’s final, Jim McGuinness’ side turned the tables on Monaghan who denied them a three-in-a-row of titles 12 months ago. Donegal led from start to finish and led by 0-10 to 0-5 after 45 minutes.

Although substitute Christopher McGuinness fired in a superb goal for Monaghan after 49 minutes, they could never draw level and Donegal responded brilliantly to the goal by scoring the next three points.

Paddy McBrearty came off the bench to score three points for Donegal in the second half while Ryan McHugh was also very influential for the men from the north west.

Karl Lacey was one of three late additions to the team, with Neil Gallagher and Darach O’Connor also starting with McBrearty, Rory Kavanagh and Martin McElhinney the three to drop out. Lacey made an immediate impact with the first score after five minutes in a close game where scores were at a premium.

Donegal scored the first three points inside the opening 13 minutes before Paul Finlay opened Monaghan’s account in the 13th minute with a left-footed point from long range and closed the gap to a point with a free nine minutes later.

Monaghan struggled to get a foothold in the game and frequently turned over possession. Donegal were much more clinical when on the ball and Odhran MacNiallais scored two stylish points from the wing.

Colm McFadden’s free stretched Donegal’s lead to 0-5 to 0-2 after 26 minutes before Monaghan claimed they were denied a penalty for a footblock by Karl Lacey on Fintan Kelly. Kelly’s shot at goal went out for a ’45’ which goalkeeper Rory Beggan nailed, having missed two dead ball strikes earlier in the game.

Monaghan picked up four yellow cards in a bad-tempered first half, Dick Clerkin receiving his just before half time for an off-the-ball challenge on Michael Murphy. Finlay’s free in first-half stoppage time reduced Donegal’s lead to 0-6 to 0-4 at the break.

Donegal were rarely troubled in the second half, even when McGuinness drilled a low shot across Paul Durcan and into the net for the only goal of the game after 49 minutes.

They scored four of the first five points after the second half through McFadden (two frees), MacNiallais and McBrearty with Monaghan giving the ball away too easily.

Michael Murphy did not score until late on but his second free after 68 minutes was a monster effort from almost 60 metres.

Monaghan captain Conor McManus struggled to get into the game and his team’s supporters were flooding out of the ground by the time he hit his only point of the game in injury-time. 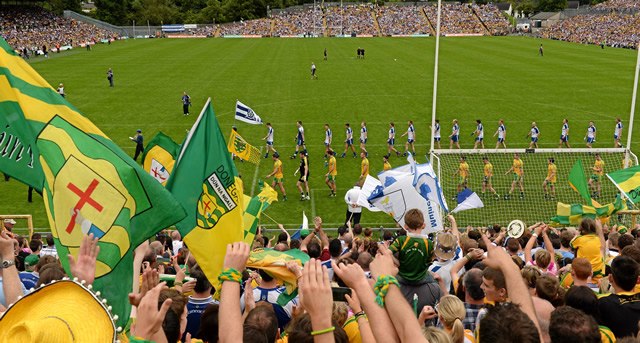