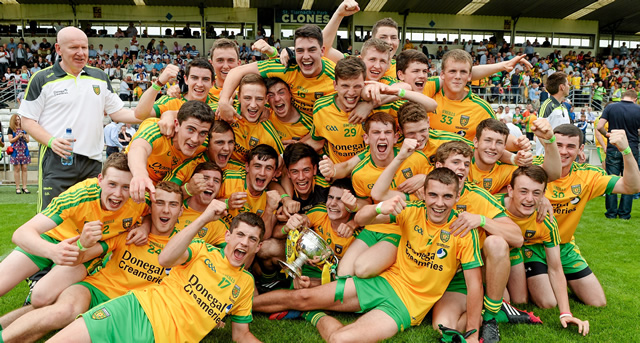 Donegal coasted to a first Ulster MFC title since 2006 with an easy victory over Armagh in Clones on Sunday.

Declan Bonner’s side scored the first 1-7 of the game, full-forward John Campbell scoring a superb goal into the roof of the net after 14 minutes. Oisin O’Neill scored Armagh’s first point in the 21st minute, and the Orchard men lost defender Cathal Boylan to a black card before half-time.

Donegal led by 1-9 to 0-2 at the break and although Ryan Hughes and Conor Cullen scored 0-7 between them for Armagh, a late Jamie Brennan goal put Donegal through to the All-Ireland quarter-finals.

Donegal were hot favourites and that tag didn’t faze this young minor team who did all the damage in the opening 19 minutes. Full-forward John Campbell brilliantly finished the only goal of the half, taking a pass from Stephen McBrearty and blasting the ball left-footed high into the roof of the net in the 14th minute.

McBrearty, a younger brother of senior star Paddy, hit two long-range points as Donegal raced away with the opening 1-7 of the game. Donegal only hit two wides compared to Armagh’s seven in the opening half, but they hit the post and missed two or three other decent goal chances.

Almost all their points were spectacular long-range efforts, Miceal Carroll possibly scoring the best of them from the near sideline from a really difficult angle. Armagh could not get their hands on the ball around midfield and when they had possession, turned it over too easily.

They had to wait until the 21st minute to register their first score from Oisin O’Neill, the hero of their semi-final win over Monaghan. The same player scored again after 29 minutes, just after Armagh defender Cathal Boylan was black-carded for a high tackle on Lorcan Connor.

Armagh goalkeeper Ryan Kearney was black-carded for bringing down Brennan five minutes into the second half but his replacement, Colm Rafferty, saved Lorcan Connor’s penalty.

Armagh outscored Donegal by 0-8 to 1-6 in the second half but the closest they got was to within five points of Donegal. Corner forward Ryan Hughes kicked four points with substitute Conor Cullen hitting 0-3 as Armagh mounted a spirited resistance.

Despite taking some wrong options in the second half and losing their way slightly, Donegal were the better side and livewire forward Jamie Brennan fisted a late goal to wrap up a minor league and Ulster title double for the county.