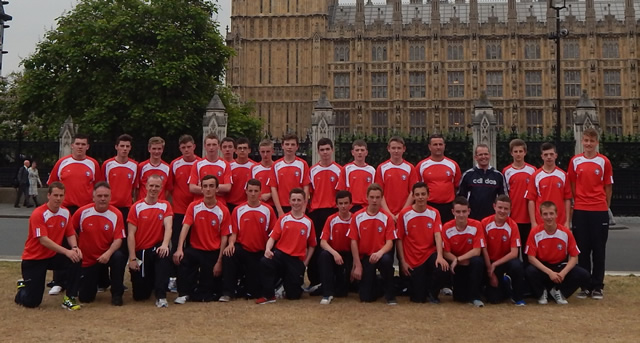 Twenty four young men from Dungannon travelled to London last weekend to represent Ulster GAA in the All British Championships. The boys were representing two schools making-up the Cúchulainns, Integrated College Dungannon and St Patrick’s Academy Dungannon. Teachers Jody Kelly, Kevin Collins and Mel Taggart gave up their summer holidays to accompany their pupils on this once-in-a-lifetime trip. Earlier this year in May over 500 young men participated in the Cross Community Cúchulainn Cup blitz with schools coming from both the maintained and controlled sector in the Tyrone GAA Centre Garvaghey.

Speaking at the Sunday evening Banquet to close the trip Ulster GAA President Martin McAviney said, “The Cúchulainn Initiative continues to be Ulster GAA’s flagship Cross Community Project which uses Gaelic Games to break down barriers and build community relations in the education sector. Ulster GAA is committed to the development of a shared future based on tolerance and respect for the differing cultural traditions that share our community.

“This year we were delighted to include the London trip for Dungannon Cúchulainns as it provides a unique opportunity to bring together young men from across the different backgrounds to travel and represent their families, their schools, their communities and their county. Many new friendships have been forged during this trip and that really goes to prove the strength of sport in building Peace and Reconciliation.”

During their stay in London, the Dungannon side were hosted in Ruislip for a warm up hurling game against a London Select on Thursday evening. Friday allowed the boys some down time were they visited Thorpe Park before heading into London to take in some of its famed tourist attractions such as Big Ben, Buckingham Palace, Trafalgar Square to mention but a few. On Saturday the team participated in the U16 Football Championships in Greenford were they met Tara Gaels, Parnells, St Laurence’s, St Dympna’s and James Connolly’s in the group stages before qualifying for the semi-finals were they bowed out to eventual winners Sean McDermotts. The group returned to Greenford on Sunday were they played in a number of keenly contested Hurling games against Granuaile and Erin go Bragh.

Following their arrival back home to Belfast on Monday afternoon it was clear to be seen that new friendships had been formed amongst the boys. It is hoped that this togetherness will be maintained and developed in the future years ahead.

A complete photo gallery of the trip can be viewed on the Ulster GAA Facebook page.