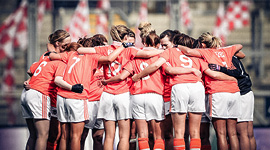 The Senior championship began with Armagh’s win over Tyrone in the Athletic Grounds. They progressed to the semi-final where they overcame Donegal and proceeded to the Final.

In the other semi-final Monaghan prevailed in Crossmaglen versus Cavan and in an excellent final Armagh were victorious and were crowned Ulster Senior champions for the third time.

At Intermediate level Down defeated Fermanagh in the first semi-final with the losing team having a second go and were successful against Antrim.

In the final itself, Down avenged their defeat from last year and took home the trophy to the Mournes.