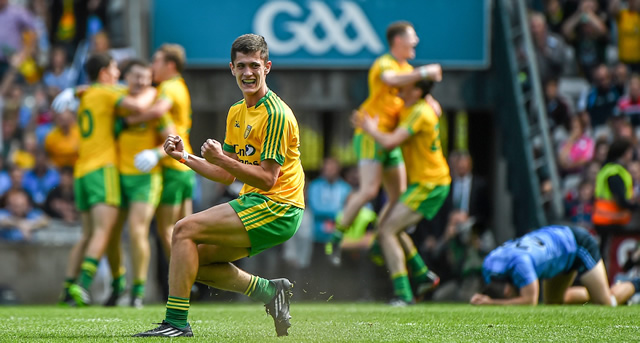 Donegal are through to the All-Ireland minor final for the first time in their history following a narrow defeat of Dublin in a very enjoyable semi-final clash at Croke Park on Sunday.

Declan Bonner’s side, who won the Ulster title for the first time since 2006 in July, will play Kerry in the final on September 21.

Donegal led by 1-6 to 0-6 at the break following a superb burst of scores in a game-changing first half spell, with full-forward John Campbell hitting 1-2 in three minutes.

Dublin pegged them back with a Jack Burke goal in the 46th minute, but Donegal hit the final three points of the game, through Lorcán Connor, the excellent Stephen McBrearty and substitute Ethan O’Donnell, who hit the match-winner in the 58th minute.

Dublin had much the better of the opening quarter and had established a 0-5 to 0-1 lead by the 21st minute when top scorer and full-forward Con O’Callaghan hit a brace of scores.

Donegal’s only score in that period came from a Connor free, but Bonner’s charges looked nervous in front of the big crowd and missed a succession of chances, and struggled to break down a massed Dublin defence.

And then the game – and Donegal – sprung to life. Their goal came when centre-back Tony McClenehan lobbed a hopeful punt into full-forward Campbell, but the big Buncrana man got a fist to the ball and directed into the corner of Eiven Whelan’s goal.

Campbell then followed that goal up with a pair of points from play, and suddenly Donegal led by 1-3 to 0-5 with just 25 minutes played.

Donegal dominated the remainder of the half, with Connor, Cian Mulligan and McBrearty adding further scores to leave the Ulster champions 1-6 to 0-6 ahead at the break.

Eoghan McHugh and O’Callaghan pulled scores back for the Dubs at the start of the second half and Conor Kavanagh had a great goal chance blocked by Donegal goalkeeper Danny Rogers.

But Cyril Kevlihan’s side did find a goal on the three-quarter mark, when Colm Basquel’s quick thinking set up Burke for a goal that gave Dublin the lead. Basquel followed up with a score from play and the Dubs led by two.

Donegal showed great character to come back for a second time. McBrearty had them level in the 55th minute with his fourth point from play and then O’Donnell won the game when he pounced on a defensive mistake to blast over.

Dublin had chances to equalise from a late free and then a 45, but both fell short and Donegal sealed a place in the U18 showpiece for the first time in their history.
—