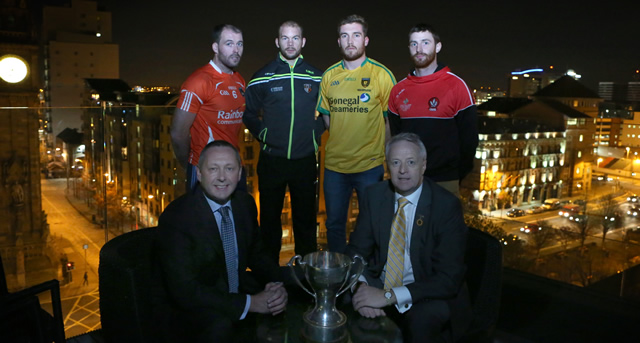 Speaking at the announcement of the major sponsorship package last night, Ulster GAA President Martin McAviney said, “We are delighted to welcome Bank of Ireland on board as the main sponsor of our primary pre-season inter-County competition. The Bank is a leading player in the personal and business banking market in this region and a significant supporter of sport. The Dr. McKenna Cup is a fantastic opportunity for our supporters to get back out and follow their County teams after the winter break and will once again provide the opportunity for County and University teams to prepare for their upcoming Ulster Championship and Sigerson Cup campaigns respectively. The Dr. McKenna Cup has a rich history dating back to the first competition in 1927, and I look forward to working with Bank of Ireland to further enhance the prestige and standing of the competition in the coming years. In 2014 we had well over 60,000 supporters supporting their Counties at the competition and we look forward to another exciting series of games in January.”

Sean Sheehan, Regional Director, NI Consumer and Small Business, Bank of Ireland UK, said: “The Dr McKenna Cup provides a lively start to the competitive year and is held in high esteem in Ulster. Bank of Ireland is committed to helping communities right across Ulster to grow and prosper and we have a strong belief that competition brings out the best in everyone. We look forward to some exciting sport from the county and university teams and are delighted to come on board as sponsors.”

The Bank of Ireland Dr. McKenna Cup will throw in on Sunday 4th January and will once again feature all nine Ulster Counties and the Province’s three main University teams; University of Ulster Jordanstown, Queens University Belfast and St Mary’s University College Belfast.

The draw for the 2015 Bank of Ireland Dr McKenna Cup also took place last night, and dealt up the following:

All Bank of Ireland Dr McKenna Cup 2015 fixtures will be confirmed by Comhairle Uladh CCC in the coming days.

Ulster GAA are again selling a limited number of competition tickets for the 2015 Dr McKenna Cup.
This will permit you access to Round 1, Round 2 and Round 3 games involving your team, both semi finals and the final for just £20/€25… that’s a potential saving of over 60%!

For more information, or to purchase your competition tickets now, visit www.ulster.gaa.ie/mckennacup2015 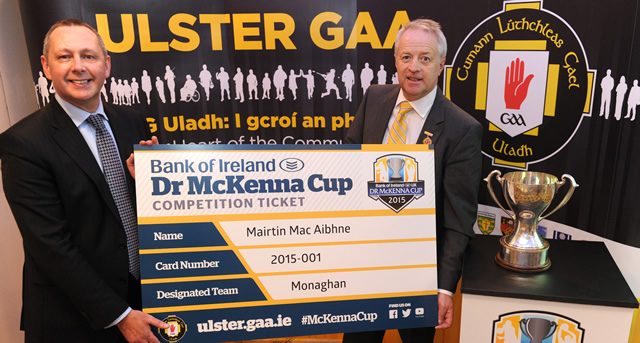