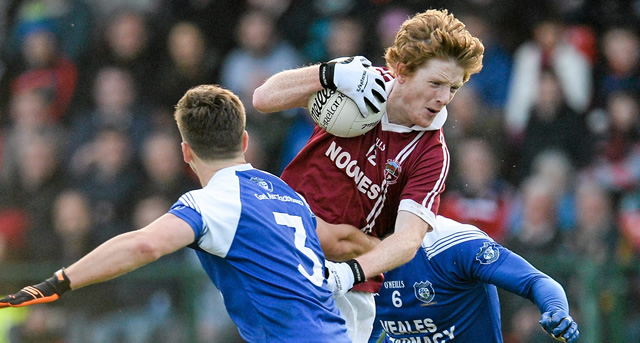 Derry champions Slaughtneil survived a great second-half comeback from Cavan Gaels to book their place in next Sunday’s Ulster club semi-final against Clontibret.

Cavan Gaels fought back from a 0-9 to 0-4 half-time deficit and had the chance to take the game to extra time, but Seán Johnston missed a 35m free in the first minute of injury time.

Gerald Bradley broke down the field and kicked the insurance point in the second minute of injury time to secure Slaughtneil’s first ever win in the Ulster club series.

It was a real game of two halves and Slaughtneil bossed the first half, Se McGuigan kicking them into the lead in the second minute. Although Johnston levelled the scores in the third minute with a superbly taken left-footed point, it proved to be Cavan Gaels’ only score from play in the opening half.

The home side completely took over, Patsy Bradley and Paudie McGuigan dominating midfield and the former threading neat passes through for lively forwards like Paul Bradley to finish off. Christopher Bradley should have scored a goal for Slaughtneil after nine minutes when he skinned Niall Murray and rounded the goalkeeper, but missed an open net and blazed the ball over the bar.

Cavan Gaels’ running game got them into big problems. Slaughtneil pushed up on their short kickouts and they struggled to get out beyond their own ’45’ for long spells. Chrissy McKaigue was very influential for Slaughtneil, roaming forward from centre half back, and had far the better of his personal dual with Cavan forward Michéal Lyng.

Slaughtneil led by 0-5 to 0-2 before Declan Meehan’s long-range free brought a badly needed score for the Cavan champions. The Derry champions reeled off four points in a row to open up a 0-9 to 0-3 lead, Christopher Bradley, Paul Bradley and Ronan Bradley all scoring from play.

While they hit five first-half wides and had a few decent goal chances, Slaughtneil were full value for their five point lead at the break and deserved to be further ahead than 0-9 to 0-4. Peter Canavan made a triple substitution at half time, with Cavan forward Martin Dunne joining Johnston up front and Paul Graham making an impact around the middle.

Levi Murphy’s goal-bound shot was saved by the Slaughtneil goalkeeper Anton McMullan early in the second half but two frees from Johnston brought them back into the game.

Slaughtneil had to wait until the 17th minute of the second half for their first score, and there was a hint of controversy about Christopher Bradley’s point, with referee Martin McNally consulting his umpires and a linesman before awarding the score.

Niall Murray and Paul Graham points, followed by a Johnston free after Dunne was fouled, left Cavan Gaels trailing by just 0-10 to 0-9 after 53 minutes. He had the chance to level the scores in the first minute of injury time but missed from a slightly difficult angle for a right-footed kicker.

Slaughtneil made him pay, with Gerald Bradley kicking only their second point of the second half to secure the victory. 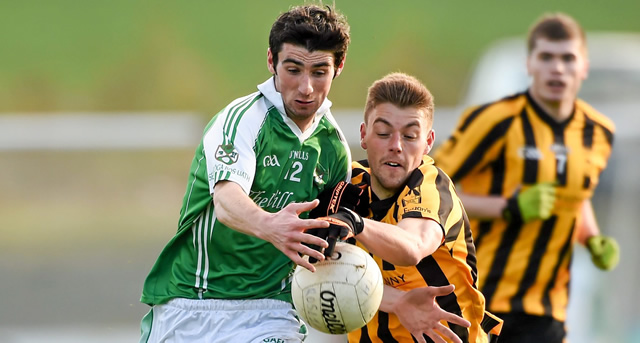 St Eunan’s set up an Ulster Club SFC semi-final against Omagh next weekend as their first-half domination led to Sunday’s six-point victory over Roslea.

With Kevin Rafferty outstanding, Eunan’s moved 0-5 to 0-0 ahead and Conal Dunne then added a penalty before the break as Roslea remained scoreless.

Seamus Quigley opened Roslea’s account in the 40th minute but there was never any prospect of a comeback.

Roslea cut the margin to six but Eunan’s had already done their job.

Dunne finished with a tally of 1-4 while veteran John Haran and Donegal star Rory Kavanagh also starred for the Letterkenny club.

On home territory, St Eunan’s went into the game as favourites but the paucity of the Roslea challenge for most of the contest was something of a surprise.

Roslea’s defensive approach early on, as they had 13 men behind the ball on occasions, appeared to hinder themselves more than Eunan’s and when the ball was delivered to the Quigley brothers Seamus and Sean in attack, they were hopelessly outnumbered.

The Donegal champions were boosted by the availability of impressive midfielder Rafferty who had been expected to miss out after sustaining a cut in last weekend’s county final win over Glenswilly.

Rafferty fired over the opening point in the sixth minute and his good work set up two further points for Dunne by the 13th minute.

Two more Dunne points increased the advantage to five by the 20th minute and the killer blow was then delivered to the Fermanagh champions in first-half injury time as Dunne coolly slotted a penalty after Roslea back James McMahon had pulled Haran’s jersey.

After a lull in proceedings, Seamus Quigley finally registered Roslea’s first score on 40 minutes but Eunan’s hit back with three unanswered scores.

As the Letterkenny side took their foot off the gas, Roslea hit five unanswered points to cut the margin to six but they outcome had long since been decided.

Rafferty capped his fine individual display with St Eunan’s final point on 56 minutes and not even the score of the match as Seamus Quigley notched a beauty with the outside of his right boot could mask a disappointing afternoon for the Fermanagh champions.

Cloughaneely recorded a memorable extra time victory over Castledawson at Owenbeg on Sunday, less than 24 hours after winning the Donegal Intermediate Football Championship.

Cloughaneely will now play Warrenpoint in the semi final on Sunday 16th November.

For the complete list of Ulster Club Championship fixtures and results view www.ulster.gaa.ie/ulsterclub2014