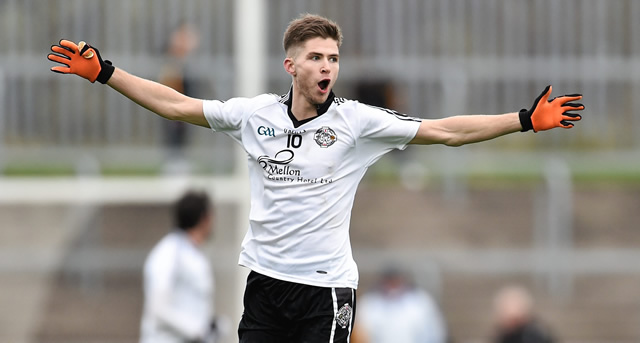 Six-time All-Ireland champions Crossmaglen led by seven points early in the second half but they lost Callum Cumiskey in the 49th minute and a straight red for Tony Kernan three minutes later left them hanging on in the dramatic closing stages.

Barry Tierney risked injury against the post to score a courageous second goal for Omagh in the 51st minute to ignite a remarkable fightback and bring the home side back to within a point.

Conan Grugan’s monster point levelled the scores after 56 minutes and late points from play off either foot from Tyrone forward Ronan O’Neill clinched a remarkable victory for Omagh.

Crossmaglen led by 1-8 to 1-2 at half time and Kyle Brennan’s point three minutes after the restart gave them a comfortable cushion, but they failed to score again for the remainder of the game.

Omagh’s first Tyrone championship success since 1988 has been characterised by late comebacks and, with a two-man advantage, they triumphed again to set up an Ulster semi-final against either Roslea (Fermanagh) or the Donegal champions.

A flu bug denied Crossmaglen the services of Aaron Kernan and while he came on for the closing stages, his absence over the hour was a huge blow. They still made a strong start to the game with Jamie Clarke and Tony Kernan frees and a Kyle Brennan point giving them a 0-3 to 0-0 lead after six minutes.

It looked slightly ominous for Omagh, but they hit back with a brilliant goal by Ronan O’Neill in the seventh minute. He gathered a kick-pass from Aaron Grugan in his first possession of the game and left James Morgan for dead, curling the ball superbly beyond Paul Hearty into the far corner of the net.

It was only brief respite for Omagh, however, as Crossmaglen’s dominance in midfield giving them a good platform to attack with a strong wind also at their backs. John Murtagh was an early replacement for Kyle Carragher and scored with his first touch and Jamie Clarke showed good stength to shake off two markers and chip the ball over with his left foot.

Omagh goalkeeper Ryan Clarke struggled with his kickouts but showed great reflexes to tip Murtagh’s goal-bound shot around the post after 21 minutes.

Crossmaglen showed signs of rustiness kicking six wides but still led by 0-8 to 1-1 as half time approached.
Omagh would have been happy with a three-point deficit knowing they had a strong wind at their backs in the second half, but a Crossmaglen goal just before the break was a crucial score.

Newcomer Padraig Stuttard, a late replacement for Aaron Kernan before the game, was found unmarked after another poor Omagh kickout and left the gaolkeeper with no chance with a clinical finish into the roof of the net. Jason McAnulla got Omagh’s first point from play to reduce Cross’ lead to 1-8 to 1-2 at the interval of a hard-hitting encounter.

When Kyle Brennan stretched Crossmaglen’s lead even further, a seven-point cushion seemed unassailable for Omagh, despite now playing with a strong breeze. Barry Tierney showed great bravery to score Omagh’s second goal. He connected with Conor O’Donnell’s floated pass across, keeping his eye on the ball to flick it into the net before crashing into the upright.

Omagh were on top in all sectors of the field and Grugan’s equaliser was quickly followed by a point from Ronan O’Neill. Omagh spurned several chances to go two points up before O’Neill, who finished with 1-4, sealed the game with another score in the third minute of injury time. 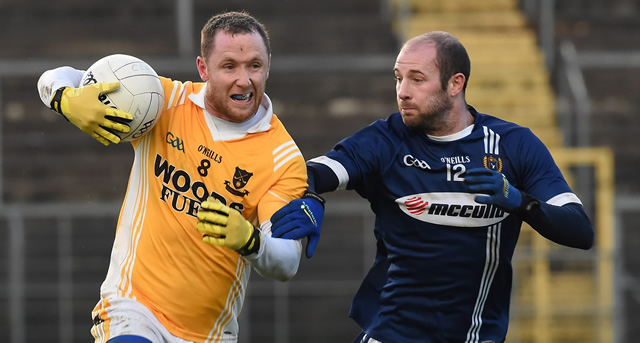 St Galls started in whirlwind fashion and looked as if they would have the game over as a contest by half time as they reeled off six quick fire in the opening ten minutes points from a range of distances and angles as Clontibret were left chasing shadows.

Michael Pollack hit two, one from a free, while Jackson McGreevy, Terry O’Neill, Conor McGourty and Aodhan Gallagher hit one apiece. That though was to be it for the Antrim champions in the first half as they failed to score again due to a combination of good defence by Clontibret but also a degree of poor finishing by themselves.

Clontibret had their first attack in the 12th minute and two minutes later they opened their account from a Conor McManus free but his usual clinical finishing deserted him on a couple of other occasions.

Brian Greenan reduced the margin to four in the 16th minute when Galls keeper took off a great save to deny him what looked a certain goal. As Clontibret got more involved out around the middle further chances accrued but they failed to convert, although they did open the St. Galls defence again for a clear cut goal chance but Ryan McGuigan’s effort was blocked.

With five minutes of normal time left Vincent Corey finished off a fine move to reduce the margin to three and while there were chances at both ends that was how it stood at the break, St. Galls 0-6 Clontibret 0-3.

If the first half was entertaining then the second half was electric as fortunes ebbed and flowed but it was Clontibret who started the better picking up from where they had brought themselves in the second quarter to register four unanswered points in the opening nine minutes to take the lead for the first time.

They were only headed once thereafter and it was St. Galls now who found themselves fighting for survival as they were down to 14 men with the dismissal of Jackson McGreavey on a straight red card. They led briefly with 11 minutes remaining but Clontibret were now dictating with points by Conor McManus and substitute Aodh Curran putting them back in front.

Michael Pollock equalised for the Antrim men but Clontibret showed nerves of steel in the closing minutes to again soak up the pressure and just when extra time looked certain Conor McManus popped up with the winner to send the pre-match favourites crashing out of the series.

There were also 7 games played in the Ulster Club Intermediate and Junior Football Championships on Sunday. Below is a summary of the results.

For a complete list of all Ulster Club Championship results and fixtures, view www.ulster.gaa.ie/UlsterClub2014