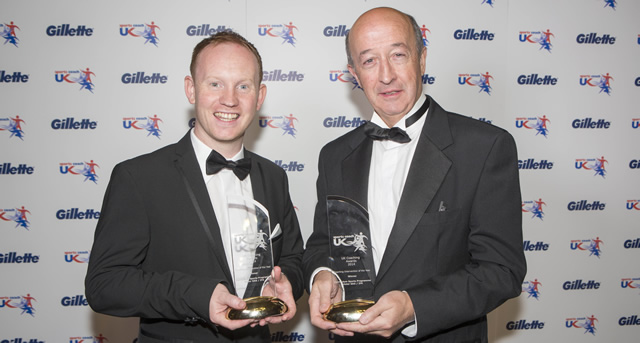 Ulster GAA and the Irish FA have been awarded the Coaching Intervention of the Year award for the Curriculum Sports Programme at the 2014 UK Coaching Awards, which were held at the City Chambers, Glasgow on 19 November.

Funded by the Department of Education and delivered in partnership between Ulster GAA and the Irish FA, 61 coaches roll out the Curriculum Sports Programme in more than 600 schools. The programme aims to up-skill Primary School teachers to deliver physical literacy to over 30,000 children in Foundation and Key Stage 1, with a view of promoting an active and healthy lifestyle among our school children.

Ulster GAA President Martin McAviney commented on the receipt of this prestigious award:
“It is a significant honour for the Ulster GAA and Irish FA Curriculum Sports Programme to be recognised at the UK Coaching Awards, and it is also clear recognition of the success of this project over the last 6 years. The award highlights the importance of collaboration amongst sporting bodies in the promotion of physical literacy to young children. I want to thank the Minister of Education John O’Dowd MLA and his Department for their continued support for the programme and I also want thank the Ulster GAA Coaching and Games staff, schools coaches and the other personnel involved in the management of this important project.”