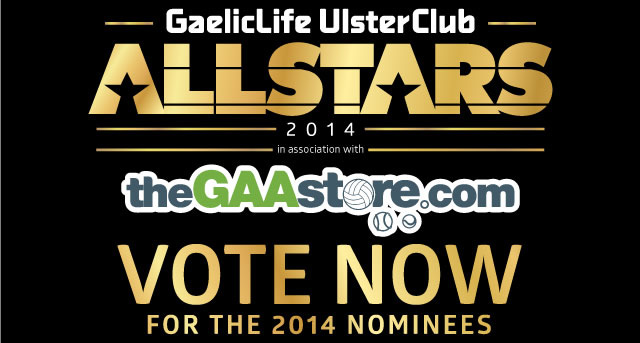 A star-studded gala event under the bright lights of Belfast city centre awaits those players from across the province who earn the 2014 Gaelic Life Ulster Club All Star Awards.

Now in their fourth year, the Club All Stars have quickly established a glowing reputation within GAA circles in Ulster, the only awards programme which truly recognises the exploits and achievements of grassroots players in Ulster across all four codes.

This year we’ve gone bigger and better than ever, taking the extravaganza to Belfast for the first time and to the prestigious surroundings of the city’s Hilton Hotel on Friday January 23 for a black tie event which is sure to last long into the night.

Once again, the principal sponsors of the event will be theGAAstore.com, with a host of the province’s top companies also rowing in behind the awards as category sponsors, the list including Optilase, Therapie, Tughans solicitors, Kelly’s Inn, O2 Enniskillen, Hilton Hotels, Co. Antrim Post, iPrint from Derry and Sally’s of Omagh.

Support your favourite nominee and be in with a chance of winning a night at the Club All Stars Gala Awards including Dinner, Bed & Breakfast for 2 people at the Hilton Belfast. Simply register your support for your favourite nominee by:
POSTAL VOTE: Vote using the official coupon on page 2 of Gaelic Life
ONLINE VOTE: Click here and select the relevant category
Closing date for votes is 10am, Monday 29th December 2014

As the Club All Stars is a provincial event, it is advisable to pre book or book additional tickets early in order to avoid disappointment.