Home / Derry defeat Down in U21 opener 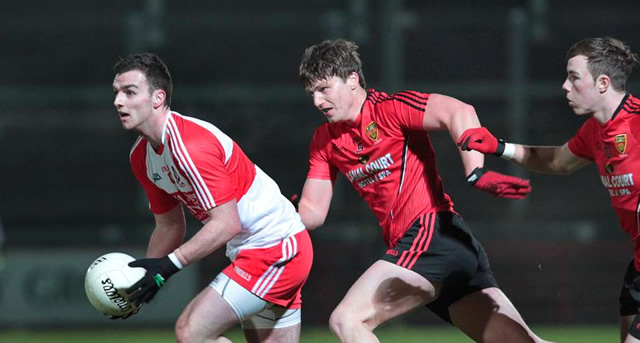 EirGrid Ulster GAA U21 Football Championship Preliminary Round:
Derry 2-12 Down 1-11

Paul McIver’s Derry side set up an Ulster U21 quarter-final against Monaghan with a deserved victory over Down at Celtic Park on Wednesday night.

Derry got off to a blistering start, Niall Toner’s goal helping them lead 1-3 to 0-0 after just five minutes, and Down never really recovered from that early deficit, although Pat Havern’s goal brought them back into it before the break, when they trailed 1-8 to 1-5.

Points from Niall Loughlin and James Kearney edged Derry five clear shortly after the break, but Down got back within three as the game edged towards the final quarter.

However, Niall Loughlin’s goal for Derry put the Oak Leaf County six ahead and effectively ended the tie as a contest. Down battled in vain in the closing 15 minutes to get back into it, but their comeback came up short.

For complete fixtures and ticketing information for the 2015 EirGrid Ulster U21 Football Championship view www.ulstergaa.ie/U21Football2015