Home / Armagh too strong for Fermanagh in League Decider 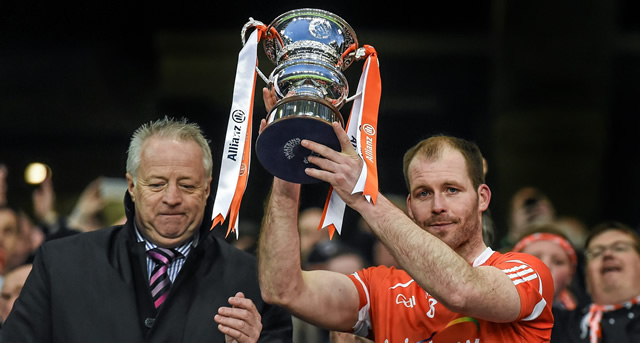 Fourteen-man Armagh concluded their successful Division III campaign in style at Croke Park on Saturday evening, seeing off Fermanagh by five points in the final to land the third tier title.

The Orchard County suffered a shock relegation to Division III under Paul Grimley last year, but having recovered to reach the All-Ireland quarter-finals last summer, they have continued their revival by returning to Division II as deserving champions.

Armagh and Fermanagh, both of whom are promoted to Division II for 2016, matched each other blow for blow in their league campaigns this year, but Armagh were marginally the better side in Saturday’s final at Croke Park, and did well to see out the win given they played with 14 men for the majority of the game.

They led 0-8 to 0-6 at the break despite having had Finnian Moriarty sent off shortly before half-time, and four points without reply at the start of the second half sent them towards victory. Fermanagh battled on, but were ultimately unable to catch Armagh despite their numerical advantage.

Armagh led 0-8 to 0-6 at the end of a competitive first half played in decent conditions.

Kieran McGeeney made two very late changes to his Armagh side named ahead of the game, Ciaron O’Hanlon and Kevin Dyas both named at midfield in place of Ciarán McKeever and Aaron Findon, but the Orchard men were second best for the opening 15 minutes as Fermanagh opened up a 0-4 to 0-1 lead.

A Tomás Corrigan point was followed by two superb frees from the stylish Seán Quigley, and although Tony Kernan got Armagh off the mark with a free, it was followed by a fine effort from Fermanagh’s Ruairi Corrigan to push them three clear.

Armagh took over from the second quarter on though, and four points without reply put them in front. Jamie Clarke, Kernan (two frees) and Aidan Forker got the scores to make it 0-5 to 0-4 after 25 minutes.

However, Armagh were dealt a blow when they lost centre-half-back Finnian Moriarty to a red card at this stage, the Wolfe Tone man picking up two yellows in the space of five minutes.

Armagh responded well to his dismissal though, as they took advantage of a flagging Fermanagh to press ahead on the scoreboard. A magnificent free from Quigley levelled things up for the Erne men, but points from Ethan Rafferty (free) and Clarke made it 0-7 to 0-5 in favour of Armagh.

Tomás Corrigan and Kernan (free) traded frees before the break, but Armagh had a glorious goal chance just before going in, Thomas Treacy making a brilliant save from Kevin Dyas’ low shot. Armagh had another late chance denied on the line from the resulting ’45’, and Fermanagh remained two behind going in.

Armagh made a good start to the second half though, Kernan landing a beauty straight from the throw-in before frees from Rafferty (2) and Crossmaglen man Kernan made it five Armagh points without reply to leave them six ahead on the scoreboard after 45 minutes.

However, just as Armagh looked to be pulling away, Fermanagh reeled them in on the scoreboard with three quick points. Quigley kicked two of them, both from placed balls either side of Tomás Corrigan’s third of the evening from play. That left it 0-12 to 0-9 in favour of Armagh with 15 minutes left.

However, Killeavy youngster Ciaron O’Hanlon kicked a vital score for Armagh with 11 minutes to go, starting and finishing the move to leave McGeeney’s side four ahead as the game entered the closing 10 minutes.

Quigley reduced the deficit for Fermanagh shortly afterwards with a superb free, but a lengthy scoreless spell was finally ended on 69 minutes by Armagh substitute Stephen Harold, and he added a second soon after, along with one from Kevin Dyas to wrap up the win for the Orchard County, who face Donegal or Tyrone in the Ulster quarter-final on June 14.

Fermanagh take on Antrim on May 31.