Home / Donegal and Tyrone set up U21 Final

Donegal and Tyrone will meet in the 2015 EirGrid Ulster GAA U21 Football Championship Final next Wednesday 8 April, following victories over Monaghan and Armagh respectively tonight. 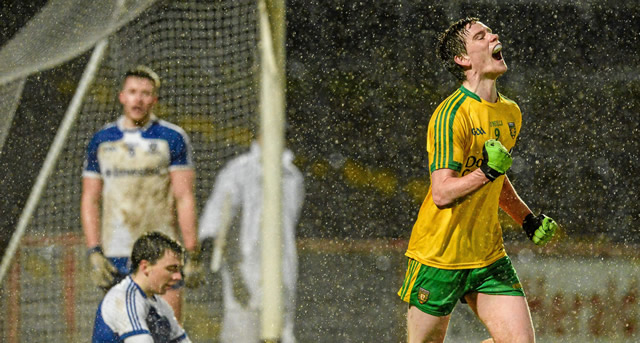 By Chris McNulty in Omagh

Donegal advanced to their third Ulster U21 final in a row as Maxi Curran’s team comfortably overcame Monaghan in dreadful conditions in Omagh on Wednesday night.

A deadly finish to the first half, in which they scored 2-4, saw Donegal pull away.

Jack O’Brien and Lorcan Connor had netted to give Donegal a nine-point lead at the interval. Connor palmed home again in the second half, after a third by Ciaran Thompson.

The teams were level at a point apiece after 23 minutes, when the game eventually got underway after a delay because of floodlight failure, but Donegal took control with a rousing end to the first period.

Hugh McFadden (2), Willie Gillespie and Ciaran Thompson hit points and with Monaghan down to 14 men the passage to the semis was effectively sealed.

Conor Lavelle walked the tightrope from a third-minute booking and the Clontibret men was dismissed when black carded in the 25th minute.

Conditions were extremely poor, but a late pitch inspection gave the go-ahead. A messy opening ensued with Ryan McAnespie and O’Connor trading points before Donegal took complete control in the latter passage of the opening stanza.

Monaghan were given a glimmer of hope when McCarthy batted home as Donegal ‘keeper Danny Rodgers lost the flight of Kevin Loughran’s ball into the mixer.

But Donegal clicked again. After David Kirk saved from influential sub Gillespie, Thompson fired in from the rebound.

It got even better when Connor got his second and Donegal’s fourth.

By Orla Bannon in Cavan

A strong first-half performance helped Tyrone ease through to a first Ulster U21 FC final in three years in Cavan on Wednesday night.

The victory was more comfortable than the scoreline suggests, with Jack Grugan scoring a consolation goal for Armagh with the last kick of the game.

First-half goals by Lee Brennan and Conor Meyler did the damage for the Red Hands, who led by 2-6 to 1-1 at half time. Despite some excellent free-taking from Armagh senior star Ethan Rafferty, Tyrone never looked in any danger.

Tyrone adapted better to the wet, greasy surface and scored the first three points, all from play, from Ruairi McGlone, Kieran McGeary and Daniel McNulty in the opening 13 minutes. Aidan Nugent’s 14th minute goal cancelled out Tyrone’s three early points but they responded to the setback, with Lee Brennan replying instantly with 1-1.

He followed up a left-footed free with a well-taken goal, pulling on a loose ball on the ground and drilling it low into the corner beyond the Armagh goalkeeper. Tyrone continued to assert their dominance when Omagh’s Conor Meyler pulled off a cheeky lob over Blaine Hughes for goal number two.

Armagh only registered one point in the first half, a free from Ethan Rafferty in the 26th minute, leaving the Orchard County trailing by 2-6 to 1-1 at the break.

Armagh’s best spell came in the third quarter when they reeled off three points in a row, two frees from Rafferty and a superb point by Ryan McShane. Tyrone senior panellist Cathal McShane hit two nice points from distance to maintain the Red Hands’ comfortable lead.

Tyrone goalkeeper Sean Fox, who came on as a first-half sub for the seniors in the defeat to Donegal on Sunday, pulled off a superb flying save to his left from Ryan McShane’s fierce shot after 52 minutes. Jack Grugan pulled back an injury-time goal for Armagh.