Home / Tyrone see off Roscommon in U21 semi 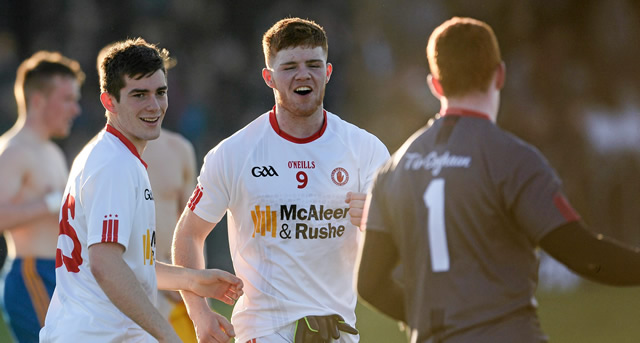 Lee Brennan was the star for the Tyrone U21s as they reached their first All-Ireland final since 2003 with a comfortable victory over Roscommon.

The Ulster champions were the better side throughout, aided admirably by their diminutive corner-forward who kicked six points in all.

It was a wonderful day for football at Markievicz Park but Roscommon never reached the heights of their Connacht championship campaign.

Meanwhile, Tyrone impressed once more with Pádraig Hampsey a rock at full-back and the performance of Cathal McShane in midfield was also noteworthy.

They advance to take on Tipperary in what looks set to be a mouth-watering decider between two physical outfits on Saturday, May 2.

Despite playing into a stiff breeze in the opening-half, Tyrone led 0-10 to 0-7 at the break.

And Brennan had them off the mark within the first minute; indeed Tyrone scored the opening four points of the encounter.

Midfielder McShane got his first, with Brennan adding another and Michael Cassidy pointing.

It was the perfect start but the Connacht champions came roaring back and Diarmuid Murtagh got off the mark in the tenth minute from a free.

Cathal Compton kicked two-in-a-row – his first was a sumptuous shot with the outside of his right foot to bring Roscommon back into it.

Mark Kavanagh kept Roscommon at bay, but when Murtagh kicked his third of the day in the 27th minute the gap was back to just two.

Lee Brennan extended the Tyrone lead to 0-9 to 0-7 before a Daniel McNulty free gave them a comfortable half-time lead.

Brennan and Murtagh exchanged scores at the start of the second-half but despite Thomas Corcoran’s impressive ‘45, Roscommon couldn’t build on that.

When Murtagh notched his sixth score of the day it looked as if the comeback was on – Roscommon only trailed by 0-14 to 0-12 with six minutes remaining.

But Tyrone frustrated their opponents and things threatened to boil over on the field, with Daniel McNulty and Ronan Daly yellow carded in one of the fracas.

With that, Roscommon’s challenge died and points from Frank Burns, a Brennan free and another free from McNulty sealed it.