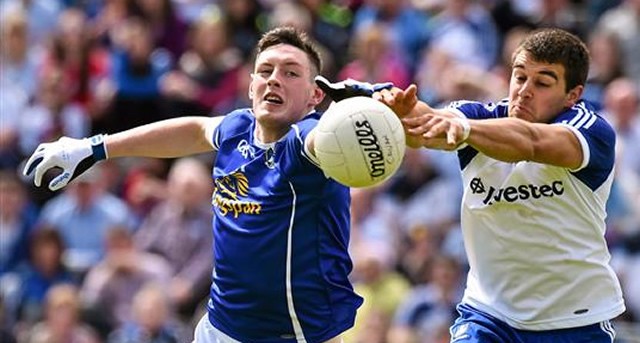 Throughout the 2015 Ulster Senior Championship, Ulster GAA will be compiling a report of the key statistics from each match. The reports will look at a range of factors contributing to game play, including possession breakdown, kick out success, possession to scores ratios and turnover stats.

Kick out dominance was claimed by Cavan, winning 25 from 45 kick outs taken (55%). Despite coming out worse off in the first half contest, Cavan clearly addressed the issue at the interval and dominated in the second half, winning twice as many kick outs as Monaghan in the second period.

When we analyse the breakdown of how the teams won their kick outs it reveals little difference in terms of success from kicks that were kicked to contested areas, i.e. those that were won through breaks or clean. Cavan were able to establish the advantage through taking a superior number of their kicks short. This short kick out policy allowed Cavan to win a total of 86% of their own kick outs (18/21), while Monaghan claimed 71% of their own kicks (17/24).

The turnover count was evenly split, with both Monaghan and Cavan forfeiting possession on 25 occasions. Despite the similarities in the final count, the real issues behind the turnover count were very different for both teams.

Cavan clearly deployed a target man and subsequent long ball approach, and while this led directly to a number of scores, it also contributed to a count of 16 turnovers via the kick pass. Undoubtedly Cavan will need to examine these kick passes further and attempt to establish the reason why this was the case; was the kick passing inaccurate / badly targeted, or was the tactic effectively dealt with by Monaghan?

While Monaghan had few issues with their kick passing they will certainly be startled by the volume of possession lost in the tackle. This area was a strength of Monaghan last year in particular, as was the ruthlessness of their hand passing; where they also lost 7 possessions this time out. A total of 16 possessions lost in the tackle and hand pass is double what they averaged in these areas in last year’s Ulster Championship. This will certainly be an area Monaghan will be keen to improve ahead of their semi final clash.

As the above has proved, Cavan had the edge in the possession share, although Monaghan did pick up the throw in for both halves which narrowed Cavan’s advantage slightly (Cavan – 50, Monaghan – 47). This margin narrowed to the minimum when it came to converting possessions to attacks. Cavan created 36 attacks, one more than Monaghan’s 35. However, the shot count was deadlocked at 24 apiece. Ultimately this game was finely balanced and the victor would be decided by the more clinical finishing. Monaghan obliged and scored with 67% of their efforts (16/24), while Cavan only managed 63% (15/24). Crucially, when we analyse the shot outcomes the one imbalance that stands out is a blocked Cavan shot. Obviously it wasn’t this particular shot that led to Cavan’s defeat, but it does highlight how crucial every facet of the match can be to the final outcome.

Figure 4A & 4B: Possession to Scores Ratios & Shot Outcomes

Despite this apparent closeness of the contest overall, when we look in more depth at how productive each team was, then it is understandable why Monaghan emerged victorious. It is one thing in Gaelic football being clinical with your shooting, but increasingly so in the modern era it is about being clinical with every possession. Monaghan delivered 3.4 points for every 10 possessions, while Cavan only managed 3.0 points per 10 possessions. This difference is not insurmountable, but given their inferiority in this area Cavan needed to secure a slightly greater share of possession than they managed over the course of the match.

Cavan were able to edge the possession battle, but in every other facet of the game they were marginally less efficient than Monaghan which ultimately led to their failure to convert their possession to victory. It has to be reinforced that this inferiority was extremely marginal, and Cavan can point to a range of incidents that could have swayed the game, and all the background stats, in their favour.

Ahead of the first round of All Ireland qualifier fixtures in a number of weeks Cavan can look in depth at a number of areas in the hope of making marginal gains. Firstly, some more analysis of their kick pass turnovers will help them establish why this number was so high. They were certainly playing high risk passes in terms of retaining possession, although they came with huge potential rewards if the ball was retained directly in the scoring zone. What they will want to establish is why so many were unsuccessful, and when they establish this they can then address the issue.
They will also need to guard against opponents preventing their short kick out routine. Opponents will likely look at the number of kicks they played short and attempt to pressurise this option. Continued work on and evolution of their kick out strategy will be important if they want to ensure they maintain dominance of their own kick outs.

Monaghan also have a number of weeks to prepare for a clash with either Antrim or Fermanagh. There is no doubt they will look at the volume of possession lost in the tackle and in the hand pass as an area in need of urgent attention. The simple fact of this match was that Monaghan were marginally better in most departments when in possession, and if they can increase their possession count, or reduce their opponent’s possession count (both go hand in hand) then they should be able to exert a greater positive influence on the scoreboard. They also lost 5 of their own kick outs to break ball, while allowing Cavan to take 11 of their kicks short. Both areas offer a potential area where Monaghan could target to increase their own possession count in subsequent matches.