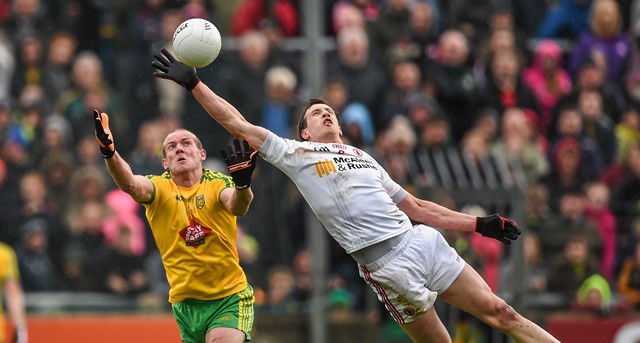 Despite the final result of this match favouring Donegal, Tyrone comfortably won the battle for possession from kick outs (Figure 1). Tyrone claimed 25 from 41 kick outs (61%). They dominated their kick outs, winning 79% (15/19). Of these 15, 11 were won short. Interestingly, Tyrone played 8 kick outs to contested areas, only securing possession from 50% of these.

Having dominated kick out possession, Tyrone failed to capitalise on this, with one obvious reason being the greater volume of turnovers conceded (Figure 3). Tyrone lost 25 possessions while in contrast Donegal only forfeited possession 19 times. Both will note similar areas that were costly in terms of possession, in particular losing 7 possessions each in the tackle. From a Tyrone perspective they will have to look in more depth at the 4 occasions when they lost possession through technically fouling the ball.

Despite Tyrone’s poor turnover stats, they dominated the kick outs sufficiently to still enjoy dominance of overall possession, claiming 48 possessions (53%) to just 42 for Donegal (47%). Tyrone (87%) were able to convert a higher percentage of possessions to attacks than Donegal (71%). Thereafter Donegal’s tactical approach revealed itself. Having seemingly been happy to concede possession to Tyrone in the form of short kick outs, and allow relatively comfortable progress into attacking zones, Donegal then evidently applied significant pressure in the attacking zone, only allowing Tyrone to convert 67% of attacks to shooting opportunities (28/42).

In contrast, despite having 12 fewer attacks, Donegal managed just 2 fewer shots. They converted 87% of attacks to shots (26/30). The success of these shots was also heavily in favour of Donegal, with Tyrone scoring from 39% of their shots, while Donegal scored from 54% of their efforts. This type of efficiency with possession has dominated Donegal performances in recent seasons; however, shot success rate of 54% is below the 60-70% zone they regularly achieved in successful performances from previous seasons.

Looking specifically at shot outcome reveals Tyrone’s wastefulness. Tyrone had twice as many shots wide (8 compared to 4 for Donegal), but they also dropped 5 shots short, compared to just 1 from Donegal
The cost of dropping shots short was revealed in one devastating Donegal counter attack. A Tyrone effort from a tight angle failed to go out of play, and having been picked up by a Donegal defender was carried and passed at pace, with Donegal scoring a point within 23 seconds of the Tyrone shot being taken. In effect, this was a 2 point swing inside 23 seconds of the match.

Figure 4A & 4B: Possession to Scores Ratios & Shot Outcomes

The productivity rating highlights how dominant Donegal were when they secured possession. For every 10 possessions, they returned 3.8 points, vastly superior to Tyrone’s 2.7 points per 10 possessions. On this basis, Tyrone would have needed to secure 17-18 more possessions (roughly 60% of possession) over the course of the match in order to secure enough scores for victory.

Tyrone dominated possession, mainly due to their successful short kick out strategy. However, this game highlighted the key issue with taking short kick outs versus delivering kick outs to contested areas. Despite kick out dominance, Tyrone were only able to generate 2 more scoring chances than Donegal. In essence, receiving kick out possession deep in defence appeared, on this occasion, to reduce the chance of generating a shot with that possession.

The outcome of this game was not directly linked to kick out dominance, nor overall possession count. However, outcome can be directly linked to a team’s efficiency in possession, with Donegal proving much more effective than Tyrone at generating shooting chances from their attacks, and ensuring these shots were successful.

Ahead of the first round of All Ireland qualifier fixtures, Tyrone will have to pay attention to their turnover count, in particular the number of possessions lost in the tackle. Obviously Donegal had a congested defensive zone and avoiding tackles and contact was difficult. Review of video footage will establish how players may have been able to avoid tackles and enable the coaching team to develop strategies to improve player understanding of this area.

They also need to review their shot selection. Despite having 2 more shots than Donegal Tyrone had 3 less scores. Double the wide count and 5 shots short proved costly to Tyrone’s chances of winning this match. Simple video review will reveal whether each failed shot was due to poor shot selection or poor execution.

As with the previous number of seasons Donegal’s efficiency in possession enabled them to secure victory despite a lower volume of possession. Their Achilles heel in the previous 3-4 seasons has been when their shooting efficiency deserts them and falls to a 30-40% mark. When their successful shot percentage falls they are not likely to have secured sufficient possession to provide a buffer.
Given their reliance on efficiency, Donegal will be keen to avoid losing any easy possession, and, having lost 7 possessions in the tackle this will be something they will be keen to reduce ahead of their semi final clash with Armagh.

They will also look to their unsuccessful shots, in particular 5 efforts that were blocked or saved. Of the 3 notable saves by the Tyrone goalkeeper, only one resulted in a successful rebound effort. Obviously converting a higher percentage of their goal efforts could increase their overall productivity even further.