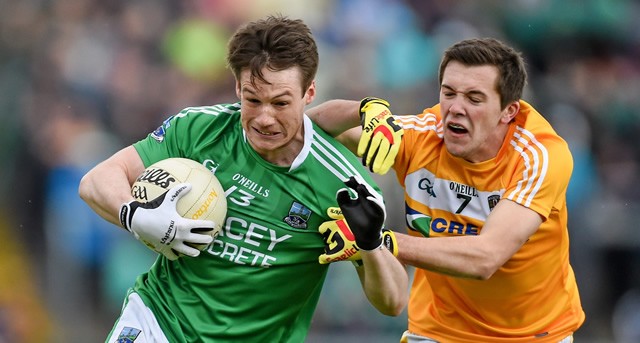 Fermanagh will meet Monaghan in the Ulster SFC semi-final after defeating 14-man Antrim at Brewster Park.

The Erne County were deserving winners, having played with an extra man from the 31st minute following the straight red card dismissal of Antrim midfielder Seán McVeigh.

However, they still only led by two points, 0-10 to 0-8, with ten minutes remaining but kicked an unanswered 1-3 in a strong finish, Seán Quigley netting an injury-time penalty with the last kick of the game.

There was hardly a bad tackle in the game until Seán McVeigh’s straight red card in the 31st minute for a high elbow challenge on Ciaran Flaherty.

Any hope of a decent contest disappeared once Antrim were reduced to 14 men while Fermanagh also lost two key players to injury in the first half, Ruairí Corrigan and Ryan McCluskey.

Erne captain Ryan Jones kicked two points from play in the first half with five of Fermanagh’s six points coming from play.

Tomás Corrigan and Jones opened the scoring before Ryan Murray got Antrim on the scoreoard in the seventh minute.

Kieran McGourty, a late replacement in the starting team for his brother, CJ, got Antrim back level in the 13th minute.

Flaherty and Jones pushed Fermanagh clear again before CJ McGourty, who came on the field after 25 minutes, kicked the first of two first-half frees to reduce the gap to a point.

McVeigh, who was named at full-back but played in midfield, had been playing well before his dismissal and Fermanagh capitalised immediately on having a man advantage.

The influential Barry Mulrone got on the end of a poor Antrim kick-out to put the home side three points clear before McGourty’s free made it 0-6 to 0-4 at the interval.

Quigley and CJ McGourty swapped frees in an edgy start to the second half before Jones lit up a dull game with a superb score from distance, his third of the afternoon and the best of the game.

Another Quigley free put Fermanagh 0-9 to 0-5 ahead after 49 minutes, without having played well.

The pace of the game didn’t pick up but CJ McGourty’s accuracy from frees was becoming a telling factor. He hit three in a seven-minute spell with Mulrone’s point on the break the sole respite for Fermanagh.

McGourty brought Antirim to within two points, at 0-10 to 0-8, after 60 minutes but points from Paul McCusker, sub Daniel Kille and another Quigley free pushed Fermanagh five clear.

Kille should have scored a goal in injury-time or passed to Marty O’Brien, but he was fouled in the square by Niall Delargy and Quigley stepped up to bury the penalty.

The eight-point winning margin flattered Fermanagh, who will hope to have injured skipper Eoin Donnelly, Ryan McCluskey and Ruairi Corrigan all available for the semi-final with Monaghan on June 21.