Home / Monaghan edge out Cavan by the minimum 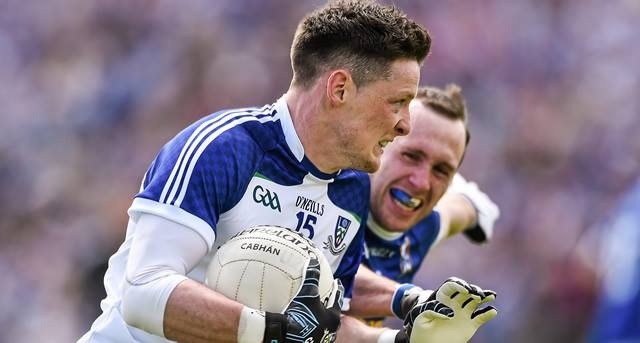 Monaghan came from four points down to edge a dramatic Ulster SFC first round tie against Cavan at Kingspan Breffni Park.

The 2013 Ulster champions repeated the one-point victory they managed over their near neighbours in the provincial semi-final two years ago, but were made to fight all the way against a Cavan team who led for most of the game.

Five points in a ten minute spell nudged Monaghan ahead and although Martin Dunne equalised for Cavan with four minutes remaining, a special score from Conor McManus helped get the visitors over the line.

Played at incredible speed and intensity, the sides were level five times in a gripping first half, after which Cavan led by 0-9 to 0-7 having had the wind.

Although only five of the 16 points scored in the opening half were from play, with Cavan managing four of them, this first round tie made for compulsive viewing.

Conor McManus landed a second minute free but Cavan signalled their intent with a superb 15 minute spell when they hit four points in a row.

Cian Mackey and Niall McDermott converted frees while Michael Argue, stationed on the edge of the square as a target man, turned Drew Wylie and fisted over the bar.

Monaghan responded with a four-in-a-row inside seven minutes.

McManus and Paul Finlay nailed frees while McManus hit the best score of the day, turning and twisting to beat Fergal Flanagan and slot the ball over the bar off his weaker left-foot.

Raymond Galligan was a late replacement in the Cavan goals before the game and if he was included because of his ability to land long-range frees, he lived up to billing, converting a free from 50m to restore parity for the home side at five points apiece after an enthralling opening 25 minutes.

Cian Mackey skipped through a few tackles to fire one over from close range and although Finlay equalised from a dead ball, Cavan hit two late points from Ronan Flanagan and Gearoid McKiernan to open up a two-point interval lead.

The free count was almost two to one in Monaghan’s favour and the home side were aggrieved at a number of frees in the middle third that went aganist their team in the second half.
The home side still led by 0-13 to 0-10 with 20 minutes to go but Monaghan used all their experience and composure to turn the game around, hitting five points in a row in a ten minute spell.

The home side still led by 0-13 to 0-10 with 20 minutes to go but Monaghan used all their experience and composure to turn the game around, hitting five points in a row in a ten minute spell.

Dessie Mone was annoyed he didn’t receive a penalty in the 49th minute when he seemed to be impeded in the square as he went to kick the ball – but the defender had the last laugh.
The brilliant McManus hit a free with Darren Hughes and sub Dick Clerkin scoring before Mone popped up with the leveller after 57 minutes.

Kieran Hughes’s free nudged them in front after 60 minutes by 0-14 to 0-13, the first time they had led since the 23rd minute of the game.

Even though Cavan sub Martin Dunne levelled the scores again with four minutes remaining, Conor McManus replied immediately with a special score from out on the wing.
Monaghan’s strong bench was a factor in the final quarter.

Colin Walshe, in his first appearance since suffering a cruciate knee injury against Dublin in last year’s All-Ireland quarter-final, popped up with a point to put them two points clear in stoppage time.

Dunne’s free deep in injury-time drew Cavan to within a point, but it was the last kick of the game and Monaghan booked their place in the Ulster semi-final against Fermanagh or Antrim.