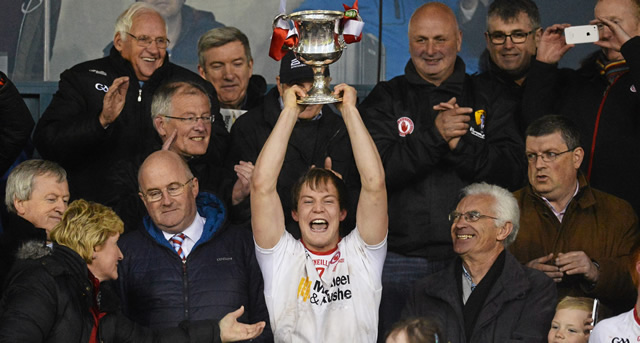 Cathal McShane struck the crucial Parnell Park goal as Tyrone came from behind to secure a dramatic fifth EirGrid All-Ireland U-21 football title.

The big midfielder gave a warrior’s display, picking up an injury in the process of the 47th minute strike which forced his substitution late on.

Tyrone just about held on in his absence as Tipp, trailing by three points entering injury-time, pulled two back through inspirational captain Colin O’Riordan.

But Tommy Toomey’s side would come up just short in their remarkable bid to add a first U-21 crown to the county’s minor success of 2011.

As for Tyrone, their first win at the grade since 2001 was earned the hard way with few even expecting them to beat Roscommon in the final.

They trailed by two at half-time here and by the same margin with 14 minutes remaining but finished strong for a famous win. The only downside was an injury-time second yellow card for defender Michael Cassidy.

Tyrone came into the encounter seeking to move level with Galway on joint third in the U-21 roll of honour.

But it was first-time finalists Tipp that neutrals favoured after a breakthrough campaign that yielded landmark wins over Cork and holders Dublin.

Tipp’s side contained four of the starting team from the 2011 All-Ireland minor final while John McGrath, a starter then, came on this time.

Steven O’Brien and O’Riordan were both on that minor final team four years ago at nearby Croke Park and have formed a dominant midfield axis at U-21 level.

O’Riordan, an All Star nominee last year and a target for Aussie Rules scouts, proved difficult for Tyrone to handle throughout.

O’Halloran scored three points in the first-half in all to give Tipp a 0-7 to 0-5 half-time lead. They were good value for it as they attacked with efficiency and recycled the ball cleverly.

Full-forward Josh Keane helped himself to a brace of points while Ian Fahey and Bill Maher were also on the mark.

Tyrone were terribly wasteful in attack, shooting 10 first-half wides that must have frustrated legendary attackers Peter Canavan and Brian Dooher in their management team.

Full-forward Daniel McNulty blasted three of those wides though partly redeemed himself by winning and then converting a free on the stroke of half-time.

Mark Bradley, a late addition to the team in place of Ruairi McGlone, hit two points for the Red Hands in the opening half.

Both sides were forced to undergo a second warm up due to a 45-minute stoppage at half-time after a ‘medical emergency’ in the crowd. It didn’t affect the quality which improved marginally on the first-half offering.

McGlone came into the Tyrone attack and pointed immediately before firing a goal chance narrowly wide. The resurgent Red Hands did draw level at 0-8 apiece before Tipp reopened the two-point gap with 15 minutes to play.

It was anyone’s game now but a well worked 47th minute Tyrone goal finished superbly by McShane swung it decisively in their direction.

The green flag put them one ahead and while they moved 1-11 to 0-11 clear approaching injury-time they were forced to battle for their lives in added-time. 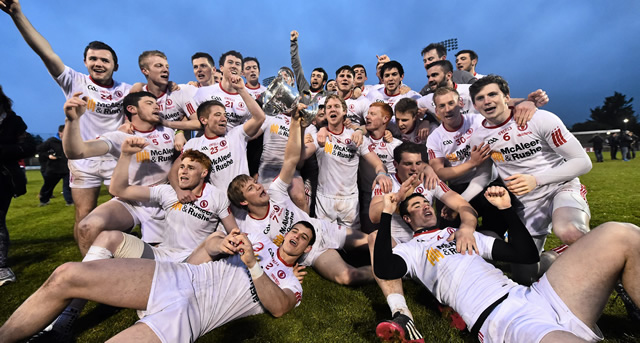