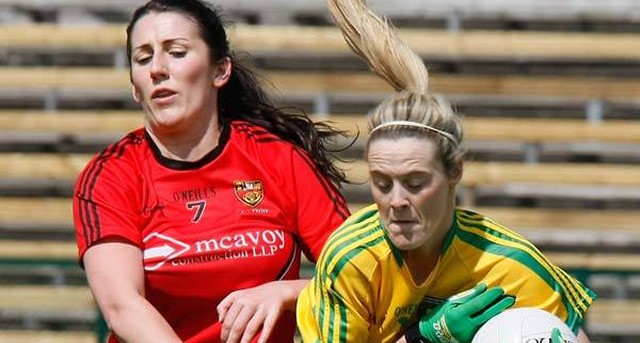 The TG4 Ulster Ladies Senior Football Championship got underway on the 20th June with a quarter final double header at Brewster Park, Enniskillen.

First up was the meeting of Tyrone and Cavan and as expected these two served up a tight affair. Cavan had the better of the first half and led at the break 0-5 to 0-3. In the second half both sides lost a player to the sin bin and with ten minutes left it looked like the Breffni girls would claim a big scalp however Tyrone dug deep and forced a 0-10 to 0-10 draw thanks to three late unanswered points (Jolene Donnelly hit the equalizer). This resulted in extra time and during the first period Red Hand substitute Zoe Loughran found the back of the net. This score was to prove the main difference between the sides as Tyrone went on to win the tie 1-12 to 0-14.

In the second game things were so much different. A new look Down side which had lost practically all of the All Ireland winning side from 2014 were much too inexperienced for a rampant Donegal outfit who went on to win 10-35 to 0-4. Chief tormentor was Yvonne Mc Monagle who bagged the majority of the Tir Chonnail goals. Manager Davy Mc Laughlin was able to empty his bench early on which in turn allowed him to rest a number of U21 players who successfully lifted the Aisling Mc Ging B title on Sunday 21st June.

The semi-finals will be a double header at Kingspan Breffni Park on Sunday 5th July. In the first of these Tyrone will meet Donegal at 1-15pm. This has the makings of absolute cracker and should be another close affair. In the quarter final the Tyrone defence came through a stern test especially in the second period of extra time when Cavan threw everything at them. They will likely need more than 10 points to win this one however in the Donnelly sisters Cathy and Jolene and Gemma Begley they have the attackers to cause Donegal problems. The Tir Chonnail side will hold no fear of Tyrone and confidence is high having only lost one game all year. If there is one downside to their preparations it was the one sided quarter final. Their defence was not tested and you can be sure their forwards will not have it as easy. Despite this they have some class players in the likes of Geraldine McLaughlin, Niamh McLaughlin and Yvonne McMonagle. Their assistant Manager Sean O Kane previously managed Tyrone and will know the threat the red hand side carry. Don’t be surprised if we get another draw.

In the second semi-final (3-15pm) holders Armagh face Monaghan. This game will be a repeat of last years final which the orchard side won. A lacklustre Monaghan got caught on the hop last time out but there will be no complacency this July with new man Peter Clarke at the helm. The Farney girls recently spent a weekend in Limerick preparing for this game. At time of going to print they report a clean bill of health and are eager to get back to winning ways. Beating Armagh will not be easy. The orchard county have an experienced side which have just claimed the Division 2 league title. James Daly has a fairly settled team with everyone knowing their job. Players like Fionnuala Mc Kenna, Kelly Mallon and Mairead Tennyson would grace any team in the country. This one will also go to the wire. What’s the betting on two draws? Either way the Ulster Final will take place in Clones on Sunday 26th July. Antrim and Fermanagh will meet in the Ulster intermediate final the same day.