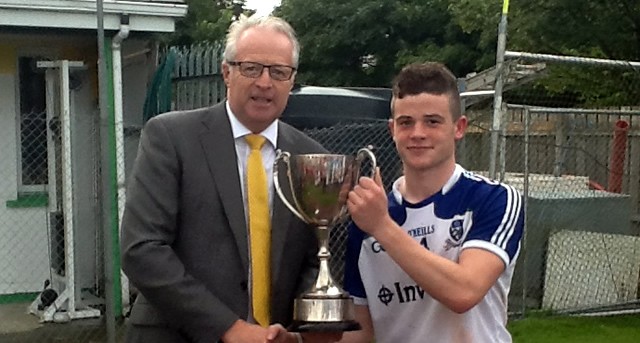 The finals of the Buncrana Cup (Ulster U16 Inter-County Academy Squads) took place on Saturday 15 August in Donegal.

In the semi-finals Derry beat Donegal 2-9 to 1-8 after a great contest. Donegal had led by 5 points at half-time but Derry rallied in the second half and 2 eary goals was the platform for a deserved 4 point victory.

In the second semi-final Monaghan had a convincing win over Armagh on a scoreline of 4-12 to 1-4. Monaghan dominated from the early stages and although Armagh showed great spirit in the second half Monaghan never looked like they were going to surrender their lead.

In the final the large crowd in attendance witnessed a brilliant game of high intensity football where all the skills of the game were on display. It was point for point in the first half and the game was level at half-time on 5 points each.

Monaghan started strongest in the second half and went 5 points clear but Derry never gave up and brought it back to a 1 point game but Monaghan finished very strong in the last 5 minutes to run out deserving winners on a scoreline of 1-12 to 2-7 to retain the Buncrana Cup.