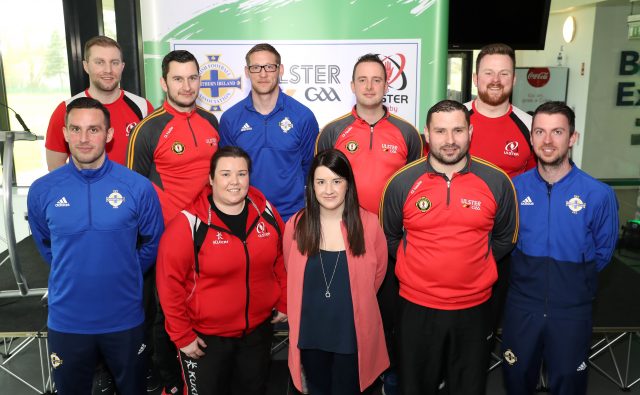 To mark the twentieth anniversary of the Good Friday Agreement, the Irish School of Ecumenics at Trinity College, Dublin is holding a one day conference on Wednesday 23rd March focusing on grassroots peacebuilding in Northern Ireland.

Ulster GAA Provincial Secretary, Brian McAvoy was invited as one of the speakers to reflect on the work of the GAA and give his assessment of the progress made to overcome social division and the legacy of violence. Read excerpts from Brian’s address below.

” The Good Friday or Belfast Agreement – incidentally the document itself is just called ‘the Agreement’ – offered a new beginning – new opportunities, new hope.

In November 2001 at a Special Congress in Dublin the GAA repealed it’s rule 21 (prohibiting members of police in Northern Ireland from being members of the Association) and it was consigned to history after 98 years in place.

Seventeen years on there is a vibrant PSNI GAA team and recently Ulster GAA were delighted to sponsor a tournament in Belfast which saw them pit their skills against teams from An Garda Síochána, the New York Police Department and the London Metropolitan Police. Plans to start an PSNI Ladies Gaelic and Camogie Club are at an advanced stage.

From little or no engagement with the RUC – and only when absolutely necessary – the GAA now enjoys cordial relationships with the PSNI across the board. You will see PSNI personnel on duty at our major fixtures in the north.

Ulster GAA work together with the PSNI on a range of initiatives delivering key messages on issues which are relevant and important to wider society – among these are our ‘Live To Play’ road safety campaign, the ‘One Punch Can Kill’ campaign, the ‘No Consent It’s Rape’ campaign and numerous other Drug and Alcohol awareness and Mental health campaigns.

“Working together on joint initiatives presents real benefits to both organisations. GAA representatives are a valuable part of PSNI’s Community Engagement seminars with our new recruits, helping the newest police officers, many of whom will be our future senior leaders, learn about the importance of Policing in partnership with the Community.”

I’m not sure what the advocates of the ‘foreign games’ ban all those years ago would make of the GAA’s current involvement with the Irish Football Association and Ulster Rugby.

One initiative in which we have been collectively involved in for a number of years is ‘The Game of Three Halves’ which is a concept that uses all three sports to bring people from different backgrounds together to play and enjoy each other’s company. This has been replicated at local level whereby local clubs come together to deliver joint participation events.

This multi-sport partnership with Ulster Rugby and the IFA has evolved organically in recent years as we recognise the collective objectives across areas such as community development, good relations, club and volunteer development and capacity building.

Just a few months ago, for example, the three Sports bodies teamed up with the Department of Justice in a campaign to raise awareness of domestic abuse.

The partnership through its “Sport Uniting Communities “strategic framework is committed to serving the community through sport, celebrating diversity and leading on a shared future.

The partnership recently secured funding through the Peace IV Programme under the theme of “Building Positive Relations.
The Cúchulainn Cup initiative is perhaps the best known of Ulster GAA’s cross community outreach activities. 2018 will mark its tenth anniversary. This cross-community initiative offers young people not engaged with Gaelic Games the opportunity to represent their school and town in Hurling and Gaelic football.

The project combines the Controlled, Integrated and Catholic maintained sectors in a programme of GAA presentations, Gaelic Games coaching and competition. This has forged many lasting friendships and has opened up the sport of GAA to young people from different community backgrounds. Visits to North America and more recently London has given fortunate participants the opportunity to be ambassadors for the GAA among peers of other cultures.

Over the ten years 18 different towns/areas have been involved in the initiative with approximately 60 schools participating. On St. Patrick’s Day it was great to have some of those who have participated in the programme as guests of Ulster GAA at the All-Ireland Club Finals in Croke Park – it was just a tad unfortunate however that no Ulster teams were in action on the day.

The Key Stage 1 Curriculum Sports Programme funded by the Department of Education sees GAA coaches and IFA coaches work in schools across all sectors and the GAA engagement portfolio is ever increasing as we develop links with many organisations. These include the Orange Order, Young Farmers Clubs, Church groups and countless statutory, voluntary and community organisations.

Last June, following in the footsteps of my esteemed predecessor Danny Murphy, I had a most enjoyable evening at the opening night of the General Assembly of the Synod of The Presbyterian Church and just last month Ulster GAA agreed to provide scholarships to Linda Ervine’s East Belfast Mission in support of their Turas Irish Language Project and it is pleasing to see Linda here today and participating in the proceedings.

We have come some distance but we are under no illusions that there is still some way to go. While the GAA is an inclusive, club and community focused organisation that is modern, innovative and driven by volunteers promoting our unique amateur ethos, we realise that its values and principles remain foreign to many in society, particularly north of the border.

However, by using GAA clubs as a vehicle for social responsibility and as a hub of community inclusion the GAA family can and will attract representatives from non-traditional GAA backgrounds. GAA clubs are increasingly becoming the venue of health and wellbeing initiatives and through such initiatives we can reach out to the wider community. Just last week I witnessed a cross community pre-Easter Activity event, organised by members of the Church of Ireland, taking place in a club in County Down.

The GAA will continue to foster social integration through work with the wider community and through our ever-closer relationships with other sporting governing bodies.

Inclusivity is a core value of the GAA and through our outreach activities we hope that we will continue to change perceptions about the GAA. By doing so we hope we can demonstrate that we are an organisation that is open and welcoming for all, irrespective of creed, race, gender, age, ability, colour or sexual orientation.