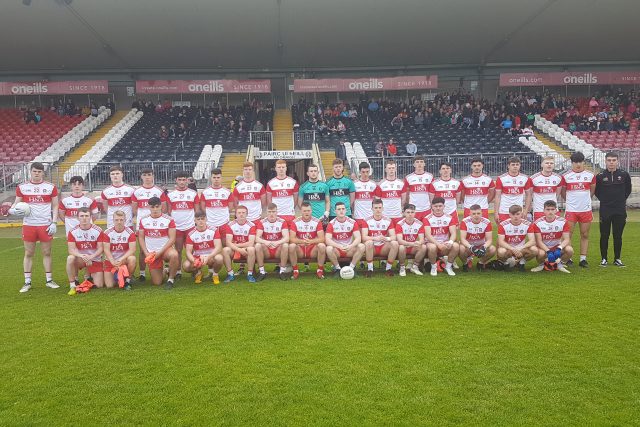 Derry advanced to a second consecutive EirGrid Ulster Under 20 Final after an exciting three point win over Fermanagh on Friday evening.

The Oak Leaf men took control of the game in the opening minutes of the second half and despite a brave Fermanagh challenge they weren’t to be denied a final place.

There was little to choose between the sides in the opening minutes with Lorcan McWilliams and Darragh McGurn trading early frees. Paul and Declan Cassidy were both on target for the Derry men as they opened up a two point gap but Cameron McBrien and Josh Largo Ellis levelled the scores again. Conleth McShane scored with the last kick of the first half to send Derry in 0-7 to 0-6 up.

Derry opened the second half the better of the two sides and hit the net through the excellent Declan Cassidy in the first minute. Conleth McShane pointed from play to make the gap five, before Cameron McBrien turned a goal chance into the net.

Dara McBrien then reduced the gap to one but Derry pushed on again and Fintan Bradley, Alex Doherty and Conleth McShane all pointed to give Derry a cushion. Darragh McGurn and Declan Cassidy traded points before Fintan Bradley and Paul Cassidy restored a five point lead for Derry.

John Reihill and Paul Breen closed the gap to three in injury time but despite a couple of late chances Fermanagh just couldn’t find the goal that would have forced the game into extra time.

Derry advance to next Sunday’s final against Cavan or Tyrone.