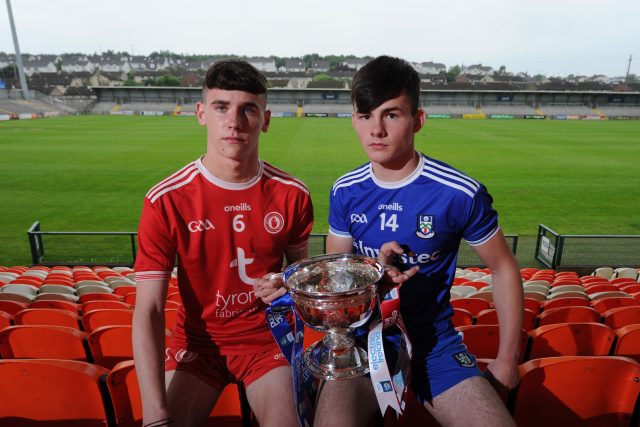 Monaghan go in search of back-to-back Electric Ireland Ulster Minor Football Championship titles when they meet Tyrone in the Final on Sunday at the Athletic Grounds at 4pm.

This is the third time the sides will have met in competitive action this season but, with the Fr Murray Cup on the line, it’s certainly the most significant meeting to date.

Monaghan are able to call on captain Jason Irwin, Karl Gallagher and Shane Hanratty who started in last year’s victory over Derry, and they will spearhead the Farney challenge again this weekend.

Monaghan opened their Championship campaign with a Preliminary Round victory over Down in Clones. The game was nip-and-tuck throughout before the Farney outscored them 1-5 to 0-1 in the closing quarter, with Tiarnan Kierans grabbing the goal.

The Round 1 clash with Antrim was dominated by the elements with both sides struggling for scores before Monaghan ran out 0-6 to 1-2 winners. Having laboured to those two victories, expectations were low in Monaghan when were drawn against Tyrone in Round 2, especially after Tyrone’s comfortable victory over Donegal in Ballybofey in the previous round.

The form book was flipped on its head in Carrickmore that evening, with Kyle Connolly, Darragh Dempsey and Eoin Duffy finding the net for the Oriel side. Suddenly the holders had found a spring in their step and strode confidently into the semi-finals. For Tyrone however, it was back the drawing board.

Colin Holmes and his side regrouped to eventually see off Down in the Qualifiers Round 3, setting up a semi-final against neighbours Derry.

Not for the first time this year, the favourites tagged was overturned as Tyrone clicked into gear to run out winners. Luke Donnelly, who had failed to make the squad in Round 1, turned in a man-of-the-match performance with 1-6 to his name. In the previous round it was Mark Devlin who top scored with 1-5.

Monaghan will go into the game as favourites, based largely on the their Round 2 victory over Tyrone earlier in the competition. However, Tyrone did show signs in the semi-final that they have learned and developed as a group since then.

It would not be a surprise if we end up with a repeat of the League decider and need extra-time to separate them but with the experience of last year’s victory to fall back on for their key players, it may just be enough to tilt the balance in Monaghan’s favour.