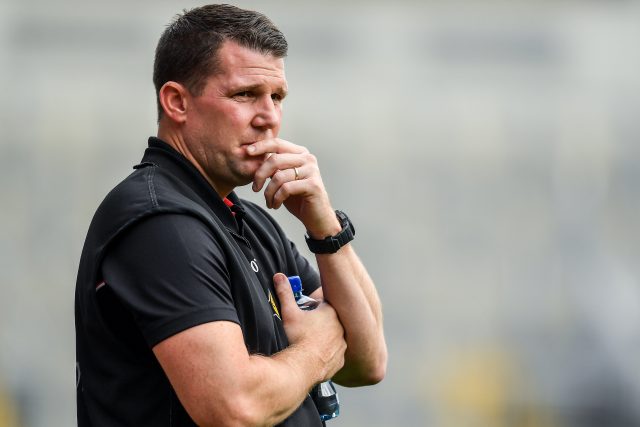 For Tyrone, it has been a long road back to the Provincial decider in a grade they had dominated for the best part of a decade.

The Red Hands collected seven titles between 2001 and 2012 but since then they have failed to make an impact, something manager Colin Holmes was pleased to rectify following this year’s semi-final victory over neighbours Derry.

“We hear about this conveyor belt of talent in Tyrone but you’re obviously judged on getting to Ulster Finals and it’s our first occasion [since 2013] so we’re looking forward to it.”

A three time All-Ireland winner as a player, Holmes had been a coach with the Acadamh Thír Eoghain squads for a number of years before stepping up with the U17 squad in 2017. That year he helped guide his young Tyrone side to win a specially convened All-Ireland competition to coincide with the change of age grades. That led to him retaining the U17 role for 2018, this time as Minor manager.

Tyrone have already collected silverware in 2019, winning the Jim McGuigan Cup [Ulster Minor League] back in the spring. In that final they needed extra-time to defeat Monaghan, but anyone leaving Maghera would have expected that these sides would lock horns again later in the summer.

That encounter came sooner than many anticipated with the sides drawn together in Round 2 of the Electric Ireland Ulster Minor Championship, but Monaghan reversed the League final result to run out comfortable winners.

Holmes happily admits that defeat in Carrickmore led to a lot of soul searching in the Red Hand camp.

“The last match in the Championship there against them [Monaghan] in the middle of May was just a systems failure all over and we got a real lesson that day. Monaghan got at us down the centre, they dragged us wide, all over the park they won their battles. We’ve used it as a reference point and the boys have stepped up since that and there is no doubt on Sunday that will be measured and tested again.”

The response of the squad since that defeat will have heartened Holmes and his backroom team. In their semi-final clash with Derry, they showed a hungry and energy which was profoundly missing in the earlier rounds. And while the defeat to Monaghan previously will be forefront in everyone’s mind, the manager is just happy that his players have the opportunity to reclaim the Fr Murray Cup.

“People are saying it is a big day for Tyrone with the U20s coming after us, but obviously we have to do our own job and hopefully the lads will be well enough versed in what their own jobs are to get settled and get into the game early.”

The game at the Athletic Grounds throws-in at 4pm. Tickets can be purchased from the usual SuperValu, Centra and O’Neill’s Sportswear outlets.