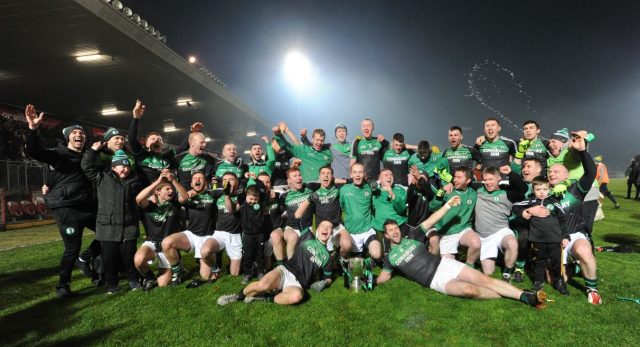 Blackhill Emeralds made up for the disappointment of their 2016 final defeat by claiming the AIB Ulster Football Junior title with a win over Buncrana in a frosty Healy Park, 1-11 to 0-9.

A victory for the Monaghan men looked an unlikely outcome in the early stages as Buncrana raced into a 0-5 to 0-1 lead within 14 minutes courtesy of five different players, including full-back Aedan Stokes.

Blackhill had opened the scoring on four minutes through Paul Finnegan but had to wait eleven minutes before Tommy Geehan raised another white flag. The sides then exchanged scores with some exciting passages of play but it was Buncrana that finished the stronger with scores from John Campbell (free) and Darrach O’Connor to go in at the break with a 0-8 to 0-5 lead.

The Monaghan champions assumed control on the restart and reeled off five unanswered scores – one from Tommy Geehan and two each from Dermot Daly (frees) and Michael Geehan. It took a full 22 minutes before O’Connor got the Donegal men’s first score of the second period and it also proved to be their last.

An Andrew Burns point stretched the lead to two points in the 30th minute and Blackhill defended resolutely through the eight minutes of added time. A late counter-attack saw Tommy Geehan finish low to the net to confirm that it would be Hugh Byrne lifting the Paul Kerr Perpetual Cup.