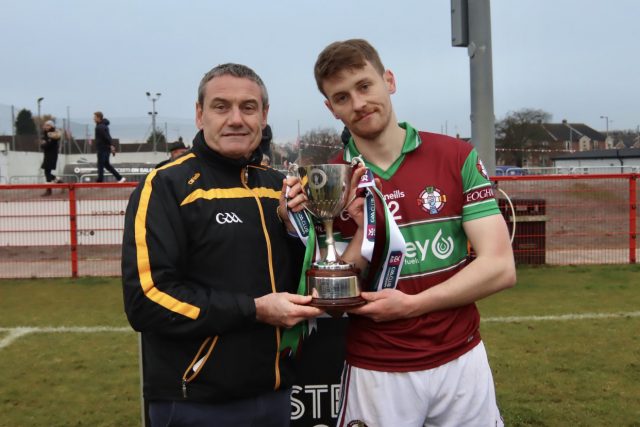 Derry champions Eoghan Rua were crowned AIB Ulster Hurling Junior Club Champions as they got the better of Newry Shamrocks in the final.

The Coleraine side were made to fight all the way against a Newry Shamrocks side who lost forward Eoin McGuinness midway through the second half.

The sides were nip and tuck for most of the opening half. Conor McPolin and Artie McGuinness accurate from frees for Newry, while Sean Leo McGoldrick supplemented early Ruairi Mooney and Niall Holly points to keep Eoghan Rua ticking over.

Eoin McGuinness tied the sides at 0-6 each before a late first half scoring burst from Dara McGoldrick, Tomas Magee and Sean Leo McGoldrick gave the Coleraine side a 0-10 to 0-6 lead.

The decisive score in the game came late when Dara Mooney hit the net in added time to seal a second AIB Ulster Hurling Junior title for the club, who won 1-16 to 0-11.