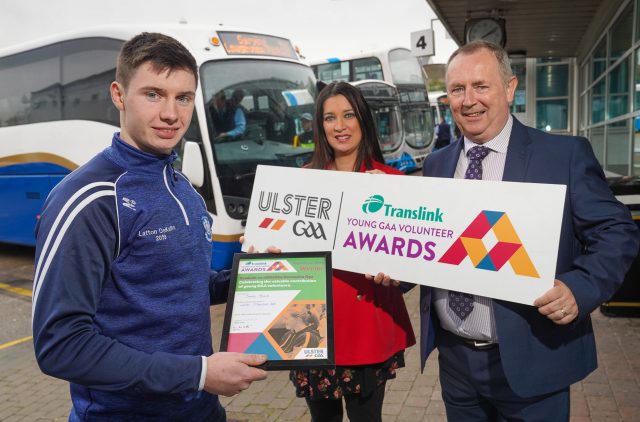 An inspirational young Gael has been awarded the Translink Young Volunteer for September.

Jamie Black from Latton O’Rahilly’s in Co. Monaghan beat off stiff competition from across Ulster for this prestigious award following his outstanding contribution to his club, reinvigorating hurling in the club.

Ulster GAA President Oliver Galligan said: “Jamie is an example of how a young Gael can have a major impact in a club.  A young enthusiastic man willing to give his time and expertise to rebuild hurling within his club from underage level is simply inspirational.  We are delighted to award Jamie this award and look forward to his continued good work in the club for years to come.”

Gerry D’Arcy from Translink presenting the award said: “I am always inspired to meet the young GAA volunteers who win this award.  To see young men and women playing a full and active part in their club and community is fantastic.  It was a pleasure to award Jamie Black, he is full of enthusiasm and passion for hurling and for his club.  He is a strong role model for his peers and younger club members.”

Club Secretary Christina Weldon said: “In 2018 Hurling was reintroduced to our Club after a long absence. Jamie was a very willing volunteer who came on board as a coach having played the game for the Club at juvenile levels. Jamie along with another coach take charge of a large number of boys & girls aged 6-13, he offers at least 8-10 hours a week between training and matches with this young group of children. We now, thanks to him, have Hurling Teams at U7, 9, 11 and 13 back in our Club. He also travelled with them to Croke Park on 30th September 2018 as they took part in Guinness world record successful attempt for largest number completing a nonstop training drill in Hurling.”

The Translink Young Volunteer of Month Award is presented each month following a highly competitive nomination process for all Ulster Clubs.  It aims to raise the impact of youth volunteering in sport.  For more information visit https://ulster.gaa.ie/youngvolunteeraward/