Translink and Ulster GAA launched the Young GAA Volunteer of the Year Award celebrated the outstanding contribution made by young members of the association to their clubs and communities throughout the challenges of the Covid-19 pandemic.

This year, more than most, it was important to recognise the young people who have risen to the test in what has been an extremely challenging year for our clubs and communities.

The full list of nominations can be seen here: https://ulster.gaa.ie/youngvolunteeraward/nominees/ 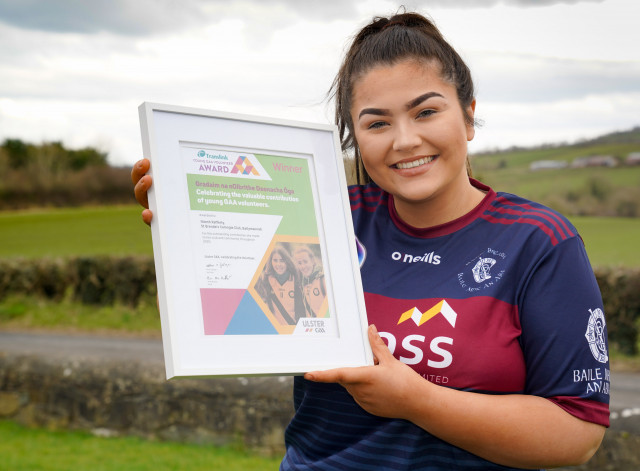 Niamh Rafferty, winner of the Translink and Ulster GAA Young GAA Volunteer of the Year Award.

A panel of experts met virtually to select one overall winner of the year and 19-year-old Niamh Rafferty, from St Brenda’s Camogie Club, Ballymacnab, Co. Armagh was recognised by winning the Translink and Ulster GAA Young Volunteer of the Year Award.

Niamh impressed the judging panel for her dedication and hard work that best represented the volunteering ethos and community spirit of the Association over the last 12 months.

Niamh will receive a certificate & specially commissioned Volunteer of the Year merchandise from Ulster GAA and, courtesy of Translink, a voucher for complimentary Enterprise Class travel for two people to Dublin (for use in the future). She will also receive a free set of Translink-sponsored underage jerseys for her club.

14-year-old Étain Devlin, of Sean Treacy’s Hurling Club in Lurgan, was also highly commended for the breadth of volunteering and commitment to her club and wider community over the last year.