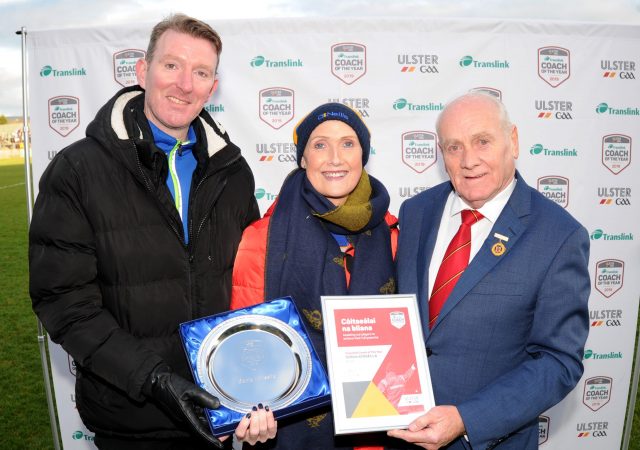 Sonia Kinsella, a coach from Saul GAC is the Translink Ulster GAA Coach of the Year for 2019.

This is the third time that Translink and Ulster GAA have partnered on the initiative, which is designed to recognise club coaches who demonstrate exceptional commitment to the coaching and development of Gaelic games.

A record number of public nominations were submitted from across Ulster, after which a panel of experts including Down manager, Paddy Tally, Sports Correspondent, Neil Loughran and Ulster GAA’s Director of Coaching & Games, Eugene Young, selected one finalist from each county in the province. Over 10,000 votes were cast in an online poll to select the overall winner.

Representing County Down, Sonia Kinsella was presented with her award at the AIB Ulster Club Senior Football Final in Healy Park, Omagh. As well as the title, she also wins commemorative kit and free coach travel for her team, courtesy of Translink.

“On behalf of Translink, I’d like to congratulate all of the finalists who have each been outstanding ambassadors for their respective counties. The standard of nominations was exceptional, so to make the final nine should be a great source of pride for the individuals and their clubs.

“Special congratulations must go to Sonia, who is a very worthy winner. Sonia has coached at her club for many years, committing countless hours. Her efforts have not gone unnoticed by her clubmates who described her as ‘one in a million’ and praised her for her strength during a tough year for the club.

“I’m delighted to present Sonia with the Coach of the Year award and look forward to transporting teams from the Saul club next season.”

“On behalf of Ulster GAA, I applaud the great work and commitment of all nine of our county winners within their clubs. We congratulate Sonia on being voted a very deserving winner overall and wish the Saul club many safe travels in the new season as they avail of their prize of complimentary coach travel.

“The thousands of public votes placed as part of the initiative for all coaches again demonstrates the strength of club support and community spirit across the GAA in Ulster.”

The full list of county finalists in the Translink Ulster GAA Coach of the Year awards was: