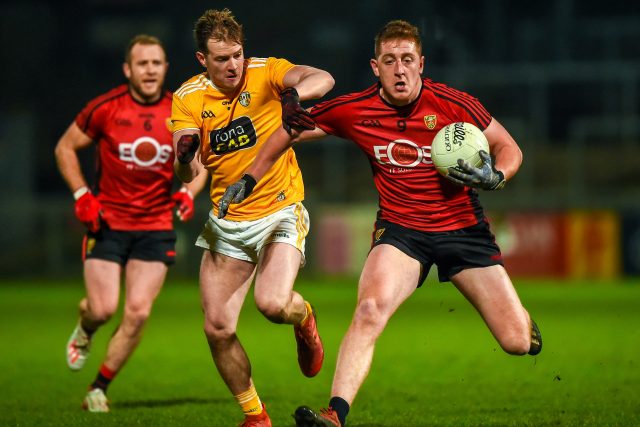 Sean Dornan of Down in action against Peter Healy. Pic: Philip Fitzpatrick/ Sportsfile

The Bank of Ireland Dr McKenna Cup semi-final line up is now known following this evening’s final round of fixtures.

Two first half goals from Ronan O’Neill set the Red Hands on their way to victory on a night when there were ten Tyrone scorers.

Rian O’Neill and Conor Turbitt helped keep Armagh in touch in the opening half as they trailed by four at the interval. In the second half a Niall Sludden goal helped re-establish Tyrone’s dominance but goals from Stefan Campbell and Rory Grugan kept matters tight right until the final whistle.

Meeting Tyrone in the semi-final will be Paddy Tally’s Down. First half goals from Corey Quinn and Conor O’Hagan helped the Mourne Men into a commanding first half lead. Paddy McBride and Ruairi McCann were among those on target for Antrim.

Down stretched their lead to nine points early in the second half before an Antrim revival brought the deficit back to four with ten minutes to play.

A strong second half saw Donegal pull away from Derry in Celtic Park to secure their place in the semi-finals at the weekend.

It was a very tight affair in the opening period with scores hard to come by after Michael Langan’s score in the second minute.

Ryan Bell and Emmett Bradley registered points for Derry but scores from Peadar Mogan and Caolan Ward left the half time score 0-4 to 0-2 to Declan Bonner’s side.

Bell hit his second point on the restart to narrow the gap to one but Donegal responded with three in a row from Langan, Daire O’Baoill and Ethan O’Donnell.

Despite scores from Conor McCluskey and Bell, Donegal eased to the final whistle with a Ciaran Diver point on a score line of 1-10 to 0-8.

Donegal will now meet Monaghan in the semi-final.