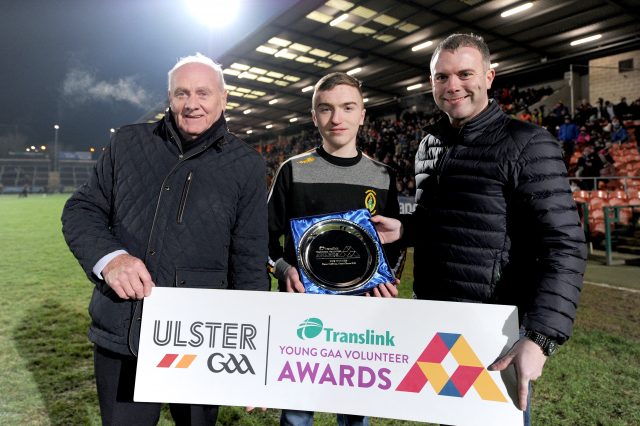 15-year-old Ciaran McGinley from Naomh Éanna GAA Glengormley was presented with the prestigious award at half-time during the match.

The Young Volunteer Award is designed to celebrate the contribution people aged 14-24 make to communities across the province. Each month during 2019, clubs were invited to nominate youth volunteers who play important roles in areas such as coaching, mentoring, fundraising and organising social activities.

A panel of experts met to select one overall winner of the year and Ciaran came out on top. Ciaran impressed the judging panel for his dedication and hard work to developing Ladies Football while continuing to play Gaelic Football himself.

“It’s very inspirational to see a young man who is busy training and playing Gaelic Football find the time and energy to help develop the Ladies Team as well.  There’s no doubt his dedication and commitment to the U12 girls benefits the team and the club, but it also helps to develop his own coaching and mentoring skills which will stand to him in the future.  The standard of entries throughout the year has been brilliant, so to win this overall award is a huge achievement – Ciaran McGinley is certainly one to watch in the coming years. Well done!”

“Ciaran embodies what the GAA is all about, he is a keen player with a love for the game and that passion has encouraged him to help with other teams in his club, most notably assisting with coaching Ladies Football.  He demonstrates GAA integration at its best – the GAA for all!  We are delighted to present this prestigious award to this outstanding young volunteer from Naomh Éanna.”

“Ciaran is an extraordinary young person.  This young man’s commitment to volunteering in the club is phenomenal. For example, when he isn’t playing himself, helping to coach the Girl’s U12 Football Team or refereeing, he is away helping out at football blitzes. He does all this while juggling his GCSE studies!  I wish we had more like him.”