Home / Wins for Antrim, Donegal, Down & Tyrone in EirGrid Ulster U20 Quarter Finals 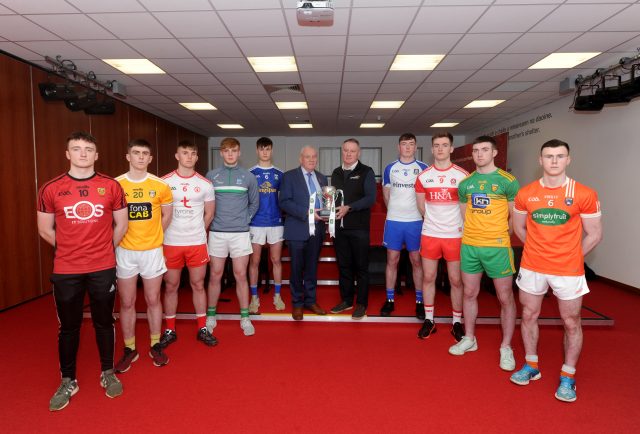 Eight teams became four as Antrim, Donegal, Down and Tyrone all took their places in the semi-finals of the EirGrid Ulster U20 Football Championship.

Antrim enjoyed a significant win over Derry in blustery conditions at The Dub in Belfast on Friday night.

The Oakleafers made a great start when Conleth McShane finished to the net in the third minute, but Antrim soon responded with an Adam Loughran goal minutes later.

Derry though hit back by the tenth minute when Jude McAtamney finished to the net after McShane had his initial effort denied.

However Antrim took over control of proceedings for the rest of the half, with Cargin full forward Pat Shivers knocking over four points to put the Saffrons two points up at the break.

Derry were wasteful in the second half with the breeze at their backs, and a determined Antrim were able to maintain their lead to the end with Shivers continuing to lead from example in attack.

Referee Lewis sent off James Diamond on a straight red card , while Marc McAfee was also dismissed on a second booking as Antrim though held on for a deserved win.

Only six points were equally shared in a cagey opening half, with Tiarnan Quinn landing a couple of frees for the Red Hands while Eoin Woods registered two points for Armagh. Ryan Jones was sent off for Tyrone for an off the ball incident just before the break.

Armagh, with a spare man, kicked on at the start of the second half and captain Justin Kierans kicked two superb points as they doubled the scores at 0-6 to 0-3.

The introduction of Darragh Canavan at half-time added a bit of extra verve into the Tyrone attack, but they were beginning to rack up the wides. However, they were handed a lifeline when Quinn lobbed Armagh keeper Shea Magill for a goal that swung the game back in their favour with ten minutes to go.

A frantic finish ensued when Armagh managed to win a free after spurning a last gasp goal chance, and James McCormick kicked it over to send the tie to extra time.

The only point in the first period of extra time went by the way of Tyrone through the brilliant Quinn.

A booming Neil Kilpatrick score before Antoin Fox and Conor Quinn points moved Tyrone four ahead, and they were able to keep their grip on the game in the closing stages.

Elsewhere, Down came away from Cavan with a six point win in what was a tightly contested affair throughout.

Down held a slender lead at the halfway point at Kingspan Breffni Park despite playing against a stiff breeze, with Dean Rice and Cathal Gorman notching two points each.

Cavan had Thomas Smith on the score-sheet twice, while Emmet Boylan and Cormac O’Reilly were also on target.

The sides were still well matched throughout the start into the second half, but a crucial Down goal moments from full time and further points from Shealan Johnston ensured a six-point win at the finish for the Mournemen.

Penalties were required in Ballyshannon after Donegal and Monaghan couldn’t be separated after 80-plus minutes of action, and it was the home side who held their nerve to win the shootout 3-1 and advance to the last four of the competition.

A Donegal goal in the 24th minute from Aaron Doherty was the difference at halftime. The sides were nip and tuck in the opening stages, with Ethan Harkin and Doherty providing Donegal scores while Monaghan’s Aaron Mulligan and Jason Irwin were both on target.

Gary Mohan hammered in a goal for Monaghan after the restart to level matters, before Mulligan kicked a subsequent point to put the Farneymen ahead.

Donegal though got their noses back in front in the 55th minute when a Harkin effort for a point dropped short and landed into the net, before late points from Mulligan managed to haul Monaghan back on terms to send the game into extra time.

The first period ended scoreless, with Donegal battling against the breeze, and an Irwin free edged Monaghan ahead from a close range free in the second period, but again the sides were tied once more when Doherty split the posts with four minutes left, paving the way for the penalty shootout.

Down will now take on Donegal, while Antrim play Tyrone in the semi-finals next weekend.

Full fixture details to be confirmed.