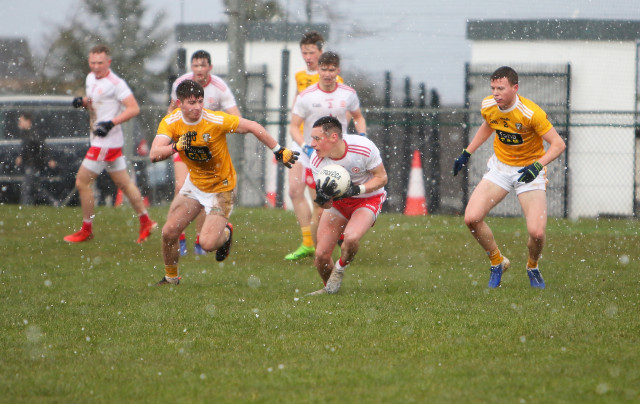 Donegal and Tyrone will meet in the final of the EirGrid Ulster Under 20 Football Championship following semi-final wins over Antrim and Down respectively on Saturday.

In Lavey, wind, rain and snow all battered Tyrone’s tie with Antrim, and the huge gust favouring the Saffrons in the first half as they took in a 0-4 to 0-2 lead at the break.

Goalkeeper Lorcan Quinn was Tyrone’s only scorer in the half, both his points coming from placed balls, while aside from Dominic McEnhill’s fine effort, Antrim’s total all came from the dead ball accuracy of Pat Shivers. The big Clann Éireann man’s booming 50-metre free in the 26th minute was a beauty, expertly judging the wind and swerving over the kick from the right wing.

A flurry of scores began the second half, Tiarnan Quinn and Darragh Canavan on target for Tyrone while Ruairi Brolly sent one over for Antrim as the Red Hands moved into a 0-7 to 0-6 lead.

From there the holders upped their game, substitute Mattie Murnaghan having a big influence around the middle and Canavan and Quinn continuing to provide scores as Tyrone opened up a four-point lead.

As the game neared its finish, Antrim began to go route one into target man Shivers and they manged to pull the score back to 0-11 to 0-9, but that was how the game ended and Tyrone advanced to the final to retain their title.

The sides were level five apiece at halftime, Doherty and Richard O’Rourke making the most of the wind advantage to get Donegal underway before Tim Prenter and Cathal Gorman responded for Down.

The Mournemen had goal opportunities soon after, but Cormac O’Raw and Prenter were unable to find the net, Donegal keeper Ronan McGeehin producing a top save.

After the break, Down moved two ahead through Ruairi O’Hare and Ryan McEvoy, but the game was still finely balanced, and Doherty and Conor McHugh kept Donegal on par.

Peter McEniff and McEvoy would trade scores as the sides continued to go score-for-score, while there were further spurned goal chances at both ends of the pitch.

On 55 minutes Down were reduced to 14 men when Ruairi O’Hare picked up a black card, and Donegal leapt ahead when Rory O’Donnell pointed and Doherty struck for the all important goal.

Down cut the lead to two in the closing stages, but Donegal held out and took their place in the final.