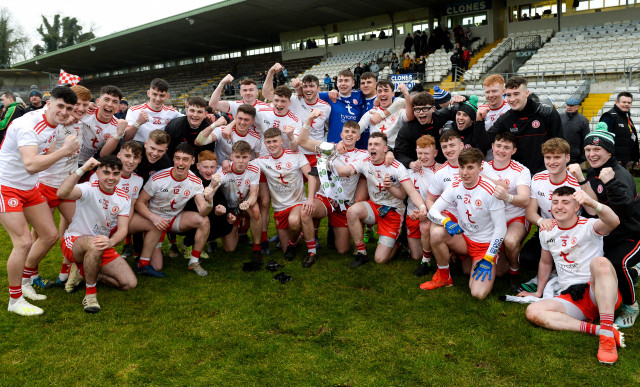 Tyrone claimed the EirGrid Ulster Under 20 Championship title at the weekend as they overcame the challenge of Donegal at St Tiernach’s Park, Clones.

There was little between the sides in the opening half with the game Tyrone just about edging ahead on the scoreboard at the interval, midfielders Kevin Barker and Joe Oguz both on target for the Red Hands.

Points early in the second half from Aaron Doherty and Luke Gavigan put the Tír Connail men into the lead but soon the game would swing.

A black card for Oisin Walsh allowed Tyrone and corner forward Ethan Jordan the space he needed to prosper, the Eglish man kicking four points in five minutes to put Tyrone in a dominant position.

A Darragh Canavan goal with ten minutes remaining gave Tyrone a cushion they would never relinquish as the Red Hands ran out 1-11 to 0-9 victors.