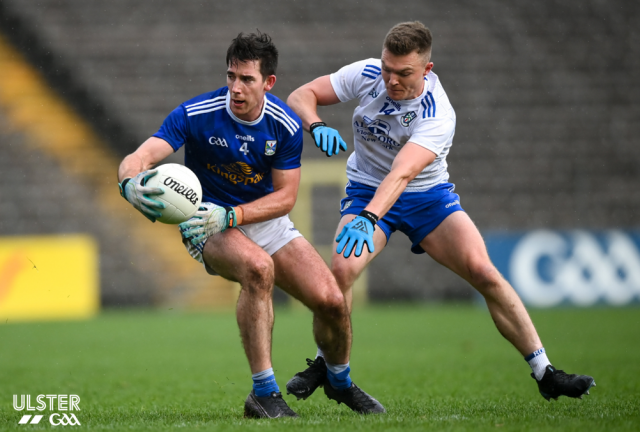 Raymond Galligan played a true captain’s role for Cavan as Mickey Graham’s side came away with a famous win over Monaghan in a roller-coaster Ulster SFC opener at Clones this afternoon.

Galligan made a string of big saves in the first half to keep Cavan in the fight, but he preserved his real heroics for the final action of the game when he lofted over an enormous free to win the derby day for the visitors.

Monaghan had found their groove and led by seven points at the break, but they froze entirely in the final quarter of the game, allowing Cavan to storm back.

Cavan will now progress to play Antrim in next weekend’s quarter-final in Kingspan Breffni. For Monaghan and manager Seamus McEnaney, the season is over.

Cavan opted to play against a stiff breeze in the opening half but still made a spritely start to the game by racing into a 1-2 to 0-1 lead by the eighth minute, with Oisin Pierson racing through to fire into the bottom corner.

Monaghan began to mount the pressure though and rattled off the next five points in a row. They could have been well in front before the half hour mark, only for Galligan to deny goal attempts from Stephen O’Hanlon, Ryan McAnespie and Karl O’Connell.

A fourth Monaghan goal chance from Conor McCarthy rattled off the crossbar, and it looked as though Cavan would be in touching distance going in at the break, a satisfactory position given the gust that aided Monaghan.

But Conor McManus had been stirring with four points to his name, and when the fifth goal chance fell his way, he made sure it was going in the net with a calm low finish past Galligan. 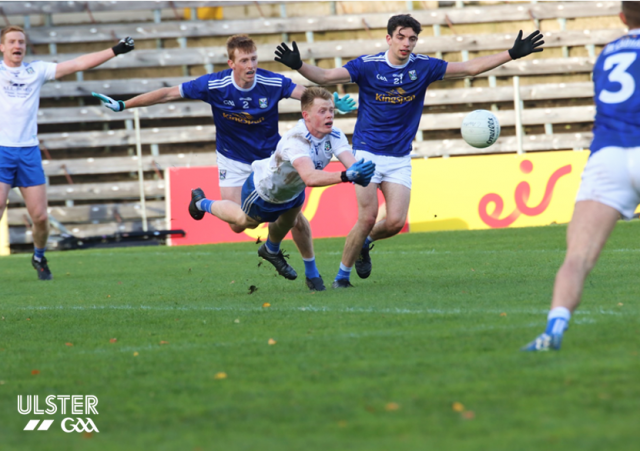 Onto the second half and it was Cavan who now had the wind to expand their shooting range, but they only tagged on three points to Monaghan’s two by time the second half water break came around. The hosts, six points ahead, seemed to stall as they entered the home straight however, and it was then that Cavan began to find belief.

Luke Fortune, Gearoid McKiernan and Martin Reilly all fired over big scores to chip away at the gap before a Niall Murray advanced mark took them to within a point. Brimming with confidence, Cavan pushed in injury time for the equaliser and found it though a confident strike from Gerard Smith.

The teams gathered themselves for extra time, and for the majority of the first ten minute period neither side made an impact on the score-board. A big moment was to come though when Monaghan had Christopher McGuinness sent off on a straight red card, but they manage to re-establish a narrow lead through scores from subs Colin Walshe and Andrew Woods by the halfway point of extra time.

Cavan needed another big response and they got it. The influential Thomas Galligan won a crucial possession close to goal, and he battled past the attention of Ryan Wylie to tee up Martin Reilly to palm to the net to put Cavan ahead for the first time since the 17th minute of the game. Shane Carey quickly brought Monaghan back on level terms, but Chris Conroy soon sent over a ’45 to edge Cavan into the lead once more.

The drama would only escalate as extra time came to a finish. Monaghan advanced upfield and were awarded a free which Rory Beggan calmly slotted over to level matters once more.

Penalties looked to be the next course of action, but when Cavan won possession and earned themselves a free just past the middle of the pitch, up stepped ice-cool skipper Galligan to float the ball perfectly between the posts from an extraordinary distance, sealing a remarkable win for his team.