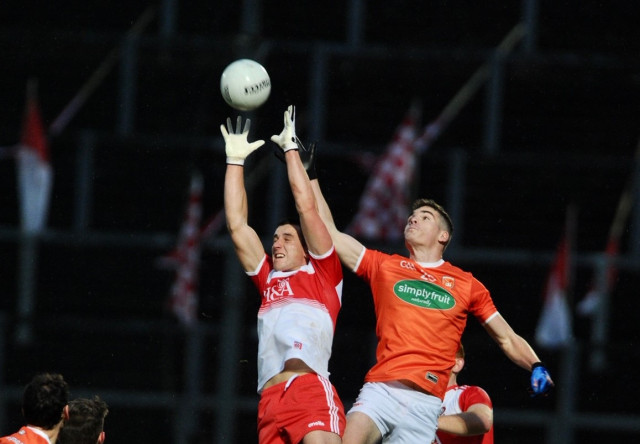 A second half push from Derry wasn’t enough as Armagh saw out a two-point win in this afternoon’s Ulster SFC Quarter Final at Celtic Park.

Kieran McGeeney’s side had build up a six-point lead by half time, but were made to work hard to stay in front following a gallant charge from the Oakleafers in the second period.

Played in teeming rain throughout, Armagh were the more clinical of the two sides in the early stages, and O’Neill Brothers Rian and Oisin, Rory Grugan, Jarlath Og Burns and Jamie Clarke all chipped in to establish a 0-9 to 0-3 lead by the 25th minute.

For Derry, Niall Loughlin claimed a couple of scores after Chrissy McKaigue had opened their account, but Rory Gallagher’s men were found scoring chances harder to come by.

After the break though Derry upped their game, and the accuracy of Shane McGuigan and Loughlin came to the fore as they cut the gap to just two points by the 51st minute. Armagh also lost the services of Jamie Clarke for ten minutes to a black card sin bin.

Armagh were now coming under pressure as Derry’s confidence grew, but Rian O’Neill ensured the visitors stayed out in front with some fine place kicking, while captain Aidan Forker and Mark Shields also landed important scores.

Slaughtneil man McGuigan again tagged on frees to keep Derry in the fight right to the end, but a huge kick from O’Neill off the ground in the final moments cemented the win for Armagh.

They now go on to play Donegal in the semi-final in a fortnight.