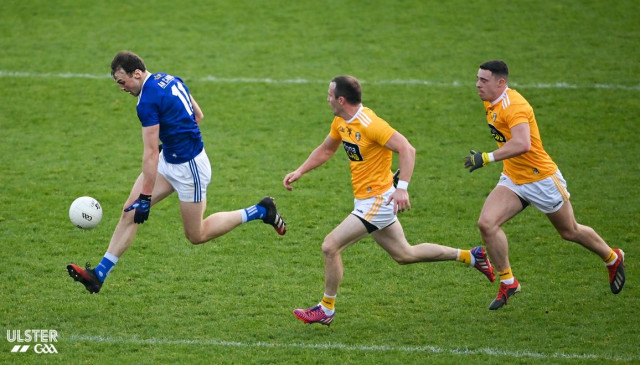 Cavan will take their place in next weekend’s Ulster Senior Football Championship Semi Finals after seeing off the challenge of a resilient Antrim at Kingspan Breffni this afternoon.

It was a close-run game throughout, with Cavan only opening a lead midway through the second period as Antrim’s solid first half showing saw them go in at half-time 0-6 to 0-5 ahead

As the second period wore on however, the Mickey Graham’s side pulled the game back in their favour to emerge four-point winners.

Lenny Harbinson’s men might be left wondering what could have been had Patrick Gallagher’s barnstorming run and shot in the 39th minute not been clawed away by Raymond Galligan. With the sides locked on six points apiece at that stage, Cavan went on to register the next three points and never looked back.

The hosts opened up a two-point lead after five minutes through Oisin Pierson and Oisin Kiernan, but Antrim levelled with Dermot McAleese and Paddy Cunningham finding the target before Mick McCann charged through the middle to split the posts and put the Saffrons ahead in the 13th minute.

Ciaran Brady found room to reply for Cavan, but the Breffni men were proving wasteful in front of the posts. In the first half they would clock up six wides and drop two shots short.

Antrim meanwhile were much more efficient, and Conor Murray converted an attacking mark before veteran Cunningham floated over a wonderful score from the left wing with 24 minutes gone.

Cormac Timoney and Kevin Quinn traded scores before centre-back Brady launched over another point to leave the margin at one going in at the interval. 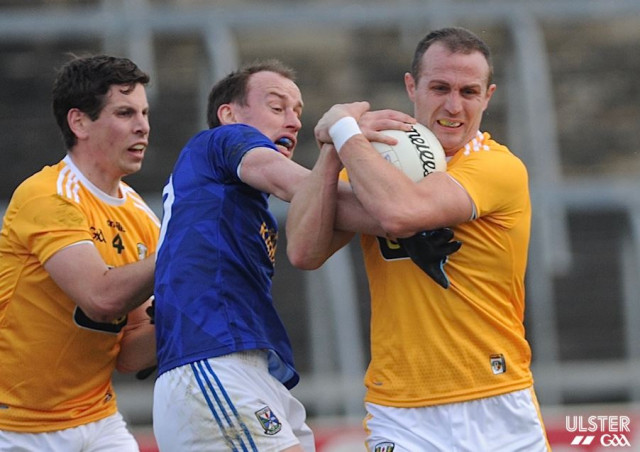 Cavan began the second half with 14 men after Killian Brady was black carded moments before halftime, but Killian Clarke got them back on level terms with a point soon after the restart.

When Galligan produced the fine save to deny Gallagher a goal, Gearoid McKiernan opened his account with a free soon after to put Cavan back in front for the first time since the 9th minute.

As play resumed after the second half water break Cavan kicked on. Thomas Edward Donohoe came off the bench to score from a mark before Kiernan made it 0-9 to 0-6.

Tomás McCann and Patrick McBride had frees exchanged with Donohoe and McKiernan, but Cavan found themselves reduced to 13 men as the game entered into the final 10 minutes following black cards for Oisin Kiernan and Gerard Smith.

Conor Murray meanwhile was driving the issue for Antrim and he forced his way through to put two points in it in the 67th minute, the Saffrons first score from play in the second half.

But Cavan finished strong and tagged on the final two scores of the game, first from the lively Donohoe and then the commanding McKiernan, to progress to the final four.