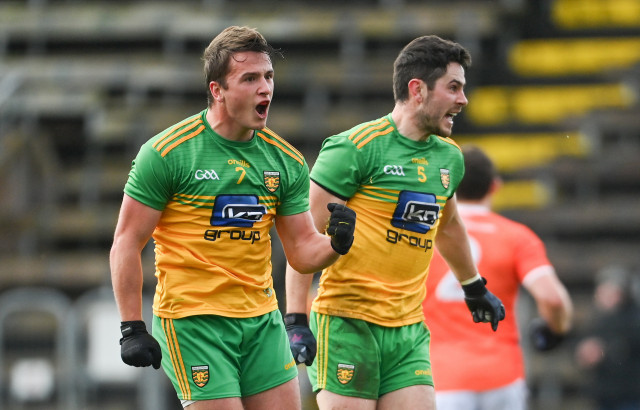 Donegal will contest next weekend’s Ulster SFC Final after steamrolling past Armagh at Kingspan Breffni this afternoon.

Declan Bonner’s men had built up an unassailable lead by halftime and were never in jeopardy of allowing Armagh a way back into the game.

After a cautious opening ten minutes, Donegal were relentless, rattling off seven scores in a row before Peadar Mogan seared through the defence to crack home a goal just before halftime to go in 1-12 to 0-3 ahead at the interval.

The Orchard scores came only through Rian O’Neill frees, and it wasn’t until Jamie Clarke shimmied through to split the posts in the 48th minute that they got their first point from play.

Despite the aid of the wind, the Armagh challenge was supressed in the second half as Donegal continued to prop up the scoreboard.

Ciaran Thompson hit two in a row and Jamie Brennan fisted over the bar before his replacement Paddy McBrearty scored with his first touch in this year’s Championship.

Conor Turbitt did offer some spark for Armagh when he came off the bench, but the gap between the teams was simply too much and Donegal ensured it stayed that way as they tagged on scores at the finish from Oisin Gallen and Langan.