Home / Semi-final weekend awaits after wins for Tyrone and Donegal 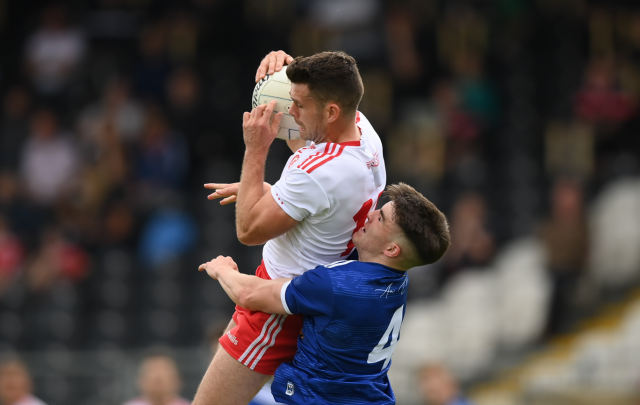 The remaining Ulster Senior Football Championship semi-finalists have been confirmed after an exciting weekend of provincial action.

Tyrone will meet Donegal in Brewster Park this Sunday with Armagh squaring off with Monaghan at Páirc Esler the day before, following their quarter-final wins last weekend.

On Saturday, Cavan’s reign as Ulster champions was brought to an end as they went down by eight points to Tyrone at O’Neill’s Healy Park in Omagh.

Darren McCurry was the undoubted star on show on the Championship debut for new Red Hand joint-managers Feargal Logan and Brian Dooher. The Edendork man was unplayable throughout his side’s 1-18 to 0-13 victory with an exhibition of scoring that saw him tally 0-10.

Both teams were nip-and-tuck in the first half hour with McCurry and Cavan counterpart Gearóid McKiernan going toe-to-toe in a scoring duel, the Cavan Gaels man registering four points. But Tyrone pushed ahead in a spell just before the break to lead by four, 0-11 to 0-7.

A goal from Tyrone sub Brian Kennedy five minutes after the restart was the key score that put the hosts well out in front, and they would go on to control the contest throughout the second period as they eased through to the last four.

Former All-Star full forward McShane ended his injury nightmare to come off the bench for his first appearance in more than a year, and got three points to his name.

Tyrone had defender Ronan McNamee red carded with 15 minutes to go, and while the champions did pull back points through Conor Smith, Conor Madden and McKiernan, the Red Hands ran out comfortable winners in the end. 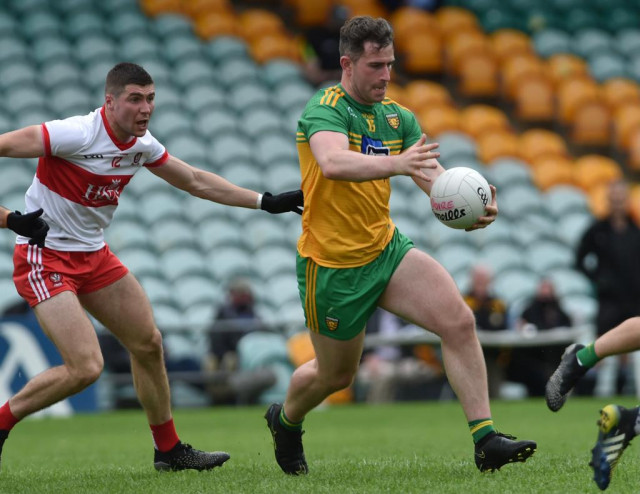 Yesterday’s encounter at Páirc Mac Cumhaill Ballybofey was a wholly different affair, with Donegal and Derry serving up a classic that was dramatically settled by a Paddy McBrearty wonder point at the death.

The contest started out as dogged but culminated in a thrilling finish with the Kilcar man coming up with the goods to send over an injury time score to seize victory for the hosts, 0-16 to 0-15, and break Derry hearts.

Rory Gallagher’s side had been worth every penny of the lead they held for the entirety of the game up to that point. They were unlucky to spurn two goal chances in the opening five minutes, but fantastic scores from Ciaran McFaul and Conor Glass saw them gain the upper hand after the first quarter.

Donegal appeared off-colour without their talismanic captain Michael Murphy on the field, but a flurry of points from Jamie Brennan and Michael Langan did pull them back to within a point at the break, 0-7 to 0-6 to the Oakleafers.

Into the second half then and Derry found a groove to go four up before Murphy entered the fray, and gradually Donegal pulled themselves closer again with Paul Brennan, Murphy and two Niall O’Donnell points.

Level with ten minutes to go, the tension was ramped up to fever pitch with McFaul and Murphy kicking scores to make it 14 points apiece, and McBrearty sending over a close-range free as the game ticked into injury-time.

Derry’s Shane McGuigan knocked over a high-pressure score to tie proceedings once more, but McBrearty stepped up with a stunning long-range effort to steal the win.