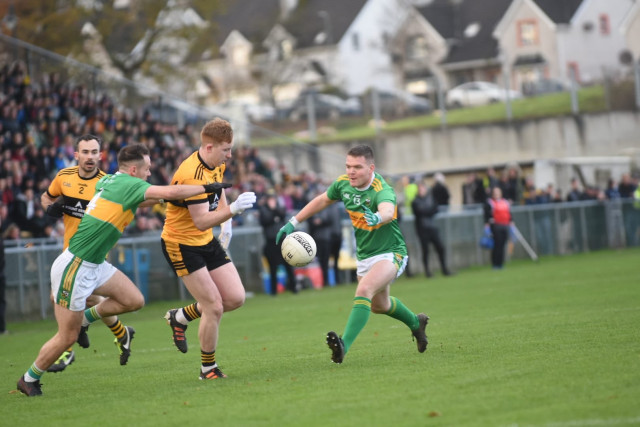 The 2021 AIB Ulster Club Championships got up and running at the weekend with the first round football fixtures already providing dramatic finales.

After a cagey and cautious game it looked like it was going to be Letterkenny’s day as goalkeeper Shaun Patton denied Glen’s Conleth McGuckin from the penalty spot with just several minutes left.

That kept the hosts in front, a lead they had held for almost the entirety of the game, until Glen defender Michael Warnock levelled the scores with a long-range point with just seconds left in normal time.

Moments later, Danny Tallon converted a free that would ultimately be the winner, sparking euphoria for Glen and heartbreak for St Eunan’s.

A Padraig McGettigan goal for St Eunan’s on 17 minutes gave them the edge in a first half punctuated by long spells of possession football.

Frees from Tallon, and McGettigan and Kieran Tobin registering scores at the other end, kept the tension steadily building all the way up to the game’s finish, with Glen losing Conor Carville to a black card in the third quarter.

Despite the penalty miss though that looked like seeing St Eunan’s over the line, big scores from Ciaran McFaul and then Warnock got Glen into the driving seat just in time before Tallon’s deciding free.

Saturday saw the Junior and Intermediate Football competitions commence, as Sean McDermott’s defeated Cookstown while Steelstown Brian Óg’s overcame Cloughaneely to both advance to the quarterfinals of their respective grades.

Monaghan champions Sean McDermott’s were convincing winners in Cones with Adam O’Driscoll’s 2-3 and a late third goal from substitute Eamon McQuillan sealing an eight-point win over Tyrone side Cookstown, who finished the game with 12 men on the field.

In an entertaining clash in Letterkenny, Derry senior star Ben McCarron weighed in with 0-6, five from frees, as Steelstown defeated gritty 13-man Cloughnaeely by two points.

After an even first half, Steelstown edged ahead as Cloughaneely saw their compliment reduced, but the Donegal men stayed in contention and nearly seized victory in injury time only for Lee O’Brien’s punched effort to come back off the post.