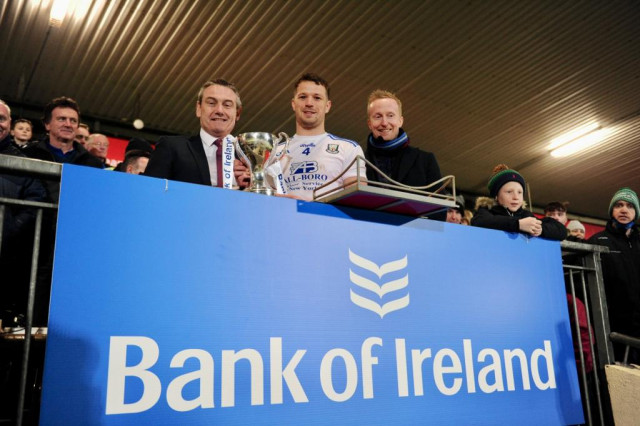 Donegal, spurred by the arrival of Michael Murphy – who scored six points – for the second half, saw a huge comeback fall short by inches.

Donegal looked dead and buried when they trailed by nine points (1-10 to 0-5) with 22 minutes to play.

Scoreless in the second half until a 48th minute Murphy free, Donegal began to erode the deficit and they made a real fist of snatching the silverware from beneath the Farney noses.

It seemed something of a damaged limitations exercise, but down the home stretch Donegal summonsed something and they kicked nine of the game’s last ten points.

When, in the 29th minute, Andrew Woods split the sticks with a delightful point off the outside of his left boot, Monaghan were five ahead, 1-6 to 0-4.

From almost the same grass blade, Shane Carey, with the inside of his right, made it a six-point game and the game was drifting beyond Donegal’s reach.

In between those points from Woods and Carey, Donegal manager Declan Bonner was sent to the stands after having a word too many for referee Padraig Hughes. 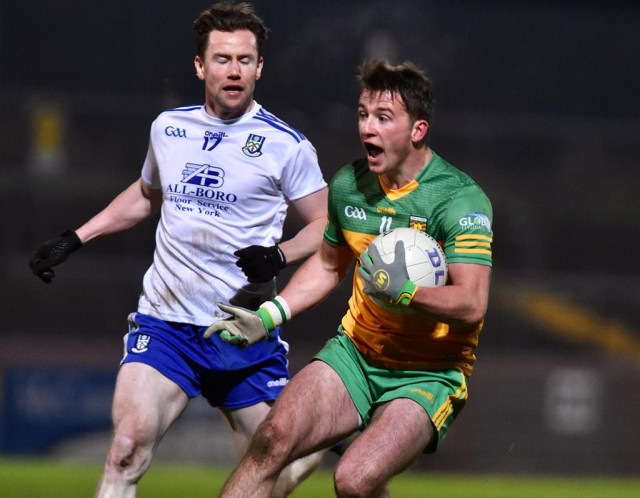 Behind 1-7 to 0-4 at the break, Donegal made a trio of replacements at half-time, with Michael Murphy among those sent in for the second half.

Within three minutes of the restart, Micheál Bannigan and Colin Walsh posted to widen Monaghan’s advantage to eight points.

Donegal’s XV was minus Jamie Brennan and Michael Langan, who both limped out of Tuesday night’s semi-final win over Derry, but Langan – an All-Star nominee in 2021 – was sent on for the last 20 minutes.

When the green flag went up in the fourth minute as Ward fired home, there was plenty of time for Donegal to shake their heads clear.

After a Ciaran Thompson pass was misplaced, Shane Carey made ground up the right flank and popped inside for Jack McCarron. While the Monaghan full-forward initially went to ground, he was able to slip inside for Ward. The Ballybay man held his nerve to slide neatly to the bottom corner past Michael Lynch.

Patrick McBrearty and McCarron swapped traded early points, but Ward’s goal opened up an advantage for Monaghan. Bit by bit, they widened the lead further, stretching to nine points at one stage in the second half.It was by no means game, set and match, however.

Thompson pointed down the other end and soon after the Naomh Conaill man was denied by Rory Beggan when played in by McBrearty.

Just as the respective benches were readying the water at the midway point in part one, Micheál Bannigan sold a dummy to fire Monaghan 1-3 to 0-3 in front with his second of the game.

Between the 12th and 48th minutes, an often wasteful Donegal scored just one point – a 25th minute Charles McGuinness free.

Perhaps even more alarming for Donegal was the fact that Ryan McHugh’s 54th minute point was their first from play in 48 minutes. McHugh’s tidy score, though, was Donegal’s third in a row as they brought the margin down to six by the second water break.

Ten minutes from the end, Caolan McGonagle was denied by Beggan but Donegal picked up the pieces and Patrick McBrearty, off his lesser-heralded right foot, brought Donegal to within four.

Maybe, just maybe, their supporters wondered as they checked the watches.

McCarron stemmed the flow with a free, but Murphy kicked three more as Donegal crept into contention.

Ultimately, they ran out of room – and time – as Monaghan collected the McKenna Cup for the first time since 2003.