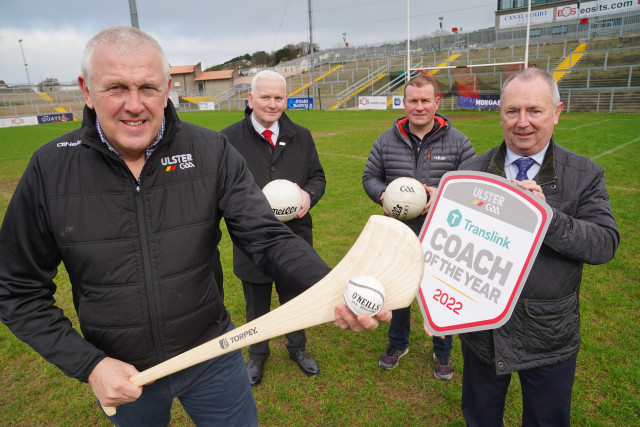 Nine outstanding volunteer coaches have been selected as finalists in the Translink Ulster GAA Coach of the Year Award.

Members of the public are now being called upon to support the finalists and vote to decide who the overall winner should be.

As well as the title ‘Coach of the Year’, the person who tops the poll will receive free coach travel for their team and specially commissioned Coach of the Year O’Neill’s sportswear.

Encouraging people across the province to get behind the finalists and have their say, Translink’s Gerry D’Arcy said:

“This is the third time we have partnered with UIster GAA on these awards and it is great to be back to celebrate these wonderful coaches who have worked tirelessly through the Pandemic.  Once again, the standard of entries was outstanding. It is incredible to hear about the level of passion, dedication and commitment volunteer coaches show to their clubs. Each club and community listed above have benefitted from their remarkable leadership, we, at Translink are delighted to help celebrate their efforts.

“Selecting an overall winner will be no easy task – so we need as many people as possible to help decide. Whatever your club or county colours, be sure to go online and cast your vote!”

“We have seen a brilliant response to our Translink Coach of The Year award on its return this year. GAA player development from underage through to adult level is dependent on the roles of our volunteer coaches and we are delighted to recognise the shortlisted coaches from the nine counties. We wish each of them well as the voting process commences.”

“The judges were highly impressed with the great work and commitment of all of the county finalists. I am delighted to play my part in the Coach of the Year campaign and would encourage all clubs and counties to go online and show their support for the coach they feel is most deserving of receiving this award.”

Voting for the Translink Ulster GAA Coach of the Year is now open at www.ulster.gaa.ie/translinkcoachoftheyear.

Voting closes at 11.59pm Thursday 3rd March. The winner will be announced on Monday 7th March.